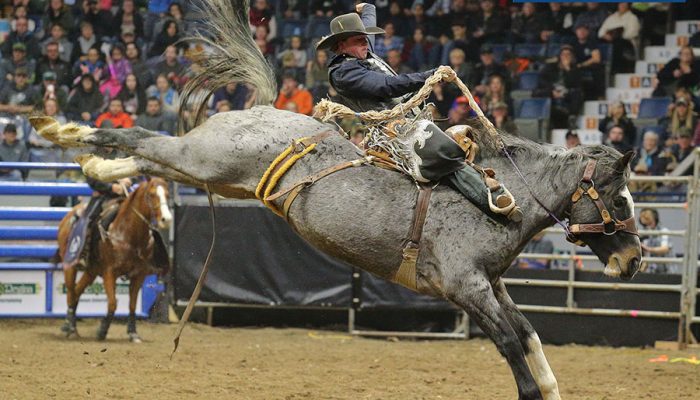 CALGARY, Alberta – Some past champions kept up their winning ways as Pool B contestants began their journey at the 2019 Calgary Stampede. Defending Barrel Racing Champion Hailey Kinsel and her horse Sister rolled into town and didn’t miss a beat picking up her winning ways that got her the $100,000 prize last year. The Texas barrel racer flew around the pattern and tied the arena record of 16.99 seconds (set in 2017 by Tiany Schuster), to add another $5500 to her Calgary account.

“It was stupid fast today,” marveled the talented rider from Texas. “The whole barrel race was. The ground’s exceptional, the best I’ve ever seen Calgary’s ground. It’s really cool for all of us to be able to come and run that fast.”

Steer wrestler Tyler Waguespack headed out of town with the $100,000 prize just two years ago. And he didn’t waste any time getting business done at Calgary this year, catching his first steer in just 3.5 seconds, for the go-round win and his first $5500.

“I love the first round here at Calgary,” grinned the Louisiana competitor. “This is my fourth year here and it’s the third time I’ve won the first round.”

Matt Shiozawa is another Pool B contender who already has one Stampede bronze in his house. The man from Idaho sizzled through his run in Tie-Down Roping to record a 7.1 second time, and snag the first place paycheque of $5500 to get his week rolling. Shiozawa won the Calgary title in 2010 in a dramatic rope-off with Fred Whitfield, with the help of his 18-year-old horse Chuck. What made Tuesday’s win more special is that Chuck is helping the Idaho cowboy to the winner’s circle again.

“You go from hoping you can win to knowing you can win. It’s that much. When you’re on your good horse and you know they feel well, you can just feel it, and you can feel the confidence in them too, I swear.”

Dawson Hay knows what winning at the Calgary Stampede looks like. His father, Rod, was a four-time champion in the Saddle Bronc riding and he earned his own novice title just two years ago.  The 20-year-old began his week with a stellar 88.5-point ride on Sunset Strip, for $5500.

“With my Dad having so much success in this arena, it’s pretty cool to follow in his footsteps. But I like to pave my own way as far as that goes. I don’t like to think of it as I have to be as good as my Dad. I’d like to be as good as I possibly can.”

It was a sweet victory for Ryan Dirteater in the Bull Riding, when he claimed the top prize for a powerful performance on a bull called Strong Arm, resulting in an 88.5, and netting the Oklahoma bullrider his $5500 Calgary bonus.

“It was the best feeling,” said Dirteater. “The book I got on that bull was they said ‘you’re gonna love him’. To win your first round of Calgary, it’s amazing. I’ve been here three times, and this is my first bronze trophy. I was talking to my family before I came and I wanted a bronze trophy to put on the shelf. And the first round, I did it. It’s an awesome rodeo.”

“It felt like he had a phenomenal day, just hardly went anywhere, stayed right in front of the chutes, really electric. I just did my best and I’m glad it worked out,” said Aus.