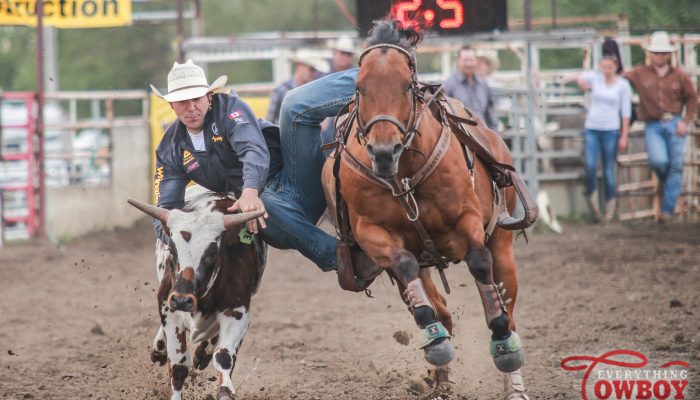 Morgan Grant Puts It All Together

It was just a matter of time.

You knew that Morgan Grant would be in great shape once he fine-tuned a few things and adjusted to his new tie down roping mount, a horse he purchased from Maynard and Logan Bird earlier this year. The three time high point award winner and former Calgary Stampede $100,000 Champion is too good not to enjoy the success that has been a signature part of his thirteen year pro career.

“It felt like everything was new,” Grant acknowledged, “new baby, buying more cows, new horse, my first year not bulldogging – it took a while to get it together. I felt like in July I couldn’t do anything right. I had calves get up on me to cost me money and it was a struggle. But after Medicine Hat, it feels like my horse and I are really clicking and it’s kind of come together.”

Yes, it has. In the eight rodeos since the end of the Medicine Hat Stampede, Grant has placed at six for a total of $13,748 in earnings and has vaulted all the way to first place in the Canadian standings. Most recently, the Didsbury cowboy posted a quick 8.8 second run at the Jasper Heritage Rodeo for a tidy $1318 and that came on the heels of a 4th place run at the La Crete Field of Dreams Stampede earlier in the week.

“I’ve always enjoyed roping calves more,” Grant said of his decision to concentrate on one event this year, “and I found I wasn’t getting the time to practice the steer wrestling. So I sold my doggin’ team and I’ve just tried to really bear down in the roping. My goal is definitely to win a Canadian roping title.”

And the Texas A and M alumnus points to an important step in reaching that goal – the Finning Pro Tour Final in Armstrong. “That’s a big one and a guy really wants to do well there.”

Bull rider Edgar Durazo continued his winning ways on the weekend. The native of Montezuma, Sonora, Mexico, who now makes his home in High River, AB consolidated his hold on second place in the Canadian standings as he won the Finning Tour stop in Dawson Creek with an electric 88 point ride for $2301, then split 1/2 at Jasper (with Coy Robbins) with 86 points and an additional $900.

The mid-season change in team roping partners doesn’t seem to have hampered either header, Steele Depaoli, or heeler, Riley Wilson. Depaoli, coming off a hand injury that cost him part of a finger has teamed up with Trent Tunke and the pair bested the field at the Dawson Creek Exhibition and Stampede with a 5.3 second run for $1773 while Wilson, roping alongside two-time Canadian Champion Dustin Bird, got it done in 4.8 seconds for the win and $1049 at the Maple Leaf Circuit event at Jasper. While Depaoli and Wilson appear to have punched their tickets to CFR 46, both Bird and Tunke still have some work to do and got some of that work done this past weekend.

For complete unofficial results, check out the CPRA website at rodeocanada.com

Next up on the CPRA schedule are Maple Leaf Circuit stops at the Pincher Creek Pro Rodeo and Cranbrook Pro Rodeo, both events running August 16-18.