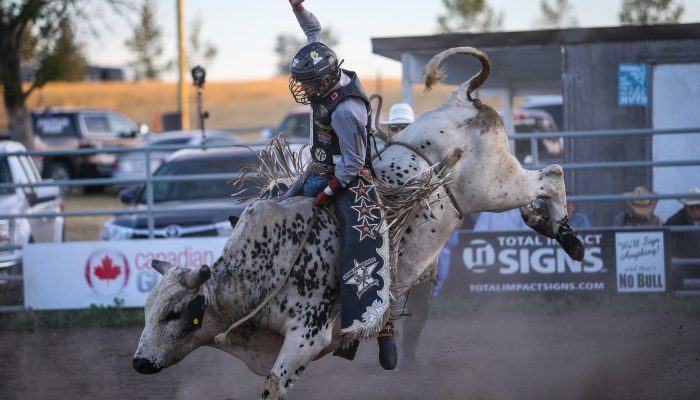 Lonnie West rides Flick the Switch (Kelser Rodeo) in Round 1 on competition. Photo by Covy Moore/covymoore.com

Having won his last event on Canadian soil, the Albertan continued his momentum in front of the home province crowd, reaching the 8 aboard Flick The Switch (Kesler Rodeo) in Round 1 for 79 points.

West sealed the victory in the championship round when he became the lone rider to deliver a perfect performance. He covered Fidgit Spinner (Couote Hillz) for an 83.5-point score.

Preparing to travel stateside to compete on the elite Unleash The Beast for this weekend’s event in Anaheim, California, the 23-year-old left the Magrath event with a check for $2,996.25, along with 260 Canadian, and 60 world points.

The win allowed West to crack the Top 10 in the national standings as the nation’s best jockey for position heading into the 2019 PBR Canada Finals in Saskatoon, Saskatchewan.

Set to buck into the SaskTel Centre on Nov. 22-23, the Top 20 riders from the national standings will compete across the two-day, season-culminating event for both the 2019 PBR Canada Championship and accompanying $50,000 bonus.

In the national standings, Roy is now No. 7, climbing from No. 15 prior to the start of the event.

Dakota Buttar (Kindersley, Saskatchewan) finished third to overtake the No. 2 ranking in the Canadian national standings. Surpassing Shay Marks (Sunnybrook, Alberta), the Kindersley man now trails the top ranking by a mere 144.99 points as he seeks his first national title.

Buttar’s climb to the top of the standings has been one for the record books.

Returning to competition for the first time in 110 days, reigning PBR Canada Bull of the Year Happy Camper (Two Bit Bucking Bulls) was the high-marked bull of the event. He bucked off Brock Radford (De Winton, Alberta) in the championship round to record the event’s top marks.