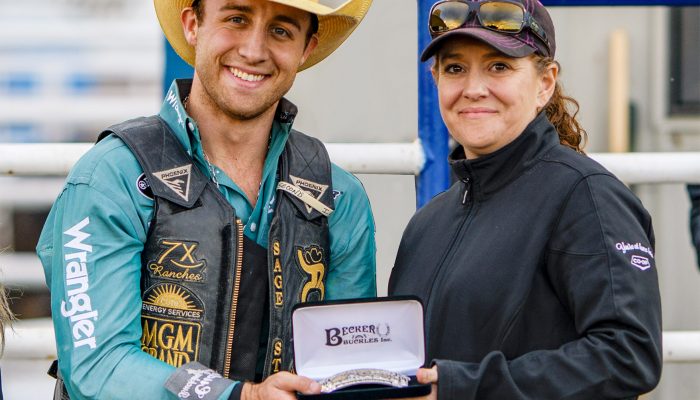 After earning a share of first in the Wainwright long-go, Kimzey rode Outlaw Buckers’ CFR horned black bull, One Eyed Charlie to 89.5 points for the short go and average win (177.5 on two head) to pocket a profitable $5165 Wainwright cheque. That was on the heels of a 90 point second place performance at Sundre for $1616 (only Mexico born Edgar Durazo was better with a 92 point score); and a third place ride at High River for $1010.

“Canada’s been good to me for sure,” the Oklahoma cowboy acknowledged. “I’m even getting used to the cold temperatures. Actually I’ve been really fortunate when it comes to the weather up here. We were getting ready for the short go at Wainwright and there was a big cloud coming our way. I told the guys it would be fine, it doesn’t rain on me up here and sure enough that cloud missed us!”

Kimzey noted that his reduced schedule to this point in the year and some time off after last year’s NFR have made a big difference. “This is the best I’ve ever felt at this time of the season. I’m healthy, feeling good, mentally focused and craving bulls. I couldn’t be in a better place right now.”

The weekend effort, in addition to padding his lead at the top of the world leaderboard, vaulted the 24 year-old to first in the Canadian standings as well. His ten appearances on this side of the 49th parallel have netted Kimzey almost $22,000 to date.

“I’d heard of Barcelona City,” Larsen noted, “but I didn’t really know her at all; everybody said she was the one to have and she definitely didn’t disappoint. This was a rodeo I always wanted to win plus anytime I can double dip and walk back to the dressing room knowing the money counts on both sides of the border, that’s a good feeling.” With a couple of additional placings at High River and Sundre, the 2018 CFR Aggregate Champion passed the $100,000 plateau in season earnings and is edging closer to injured season leader and four time World Champion, Kaycee Field.

Larsen also took time to pay tribute to the Wainwright committee and their work on a decidedly wet weekend. “They had a downpour there on Saturday; the infield was truly a lake and the committee worked all night and into Sunday. It was like magic; there may not have been dust but there wasn’t any mud either. In and out of the arena, those people were amazing; my hat is off to that committee.

And 16 year-old Justine Elliott turned in the fastest barrel racing time of the rodeo during Sunday’s short go – 17.182 seconds – to edge World Champions Hailey Kinsel and Mary Walker (and NFR qualifier Tammy Fischer) for the win.

For complete unofficial results from Wainwright, Sundre and High River, go to rodeocanada.com

Next up on the CPRA schedule is the kickoff to Cowboy Christmas with two more Finning Pro Tour rodeos—the Ponoka Stampede, June 25-July 1 and the Williams Lake Stampede, June 27-June 30 as well as the Airdrie Pro Rodeo June 28-July 1.

*Courtesy of the CPRA