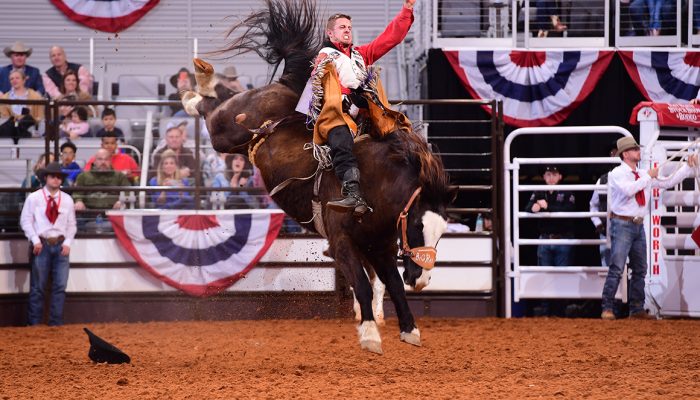 The excitement started when World War II hero and Iwo Jima survivor Don Graves belted out the Star Bangled Banner in front of an appreciative crowd. In his 90s now, he started his rendition by announcing “God Bless America,” and asked the fans to sing along for Military Appreciation Day. That set the stage for announcers Doug Mathis and Bob Tallman to recognize veterans from every branch of the service before the action in the arena started.

Right behind him was Cole Goodine of Carbon with an 85.5. Goodine added $1,320 to his checking account. Third place was a tie between Kody Lamb of Sherwood park and Pascal Isabel from Okotoks. Each scored 84 points to win $660.

Dawson Hay, from Wildwood, Alberta took the top spot in saddle bronc riding as well. Hay is another second-generation contestant that is coming off his first Wrangler National Finals Rodeo qualification. Hay was 87 points on Big Rafter Rodeo’s Meat Cracker to win $1,760.

There was only one bull rider successful on Monday night. The honors went to Australia. Ky Hamilton from Mackay, Queensland, rode Four Star Rodeo’s bull named Kermit for 85.5 points. As the only successful contestant, he got all of the $4,400 purse. With that paycheck, he is assured a spot in the upcoming semi-finals. Mackay is currently sixth in the Professional Rodeo Cowboys Association world standings. If he remains in the top 15 through the rest of the season, he will be the first Australian bull rioder to qualify for the Wrangler National Finals Rodeo since Greg Potter in 2003.

The following are unofficial results from the thirteenth performance of the FWSSR ProRodeo Tournament at the Fort Worth Stock Show & Rodeo, Monday, February 3, 2020.