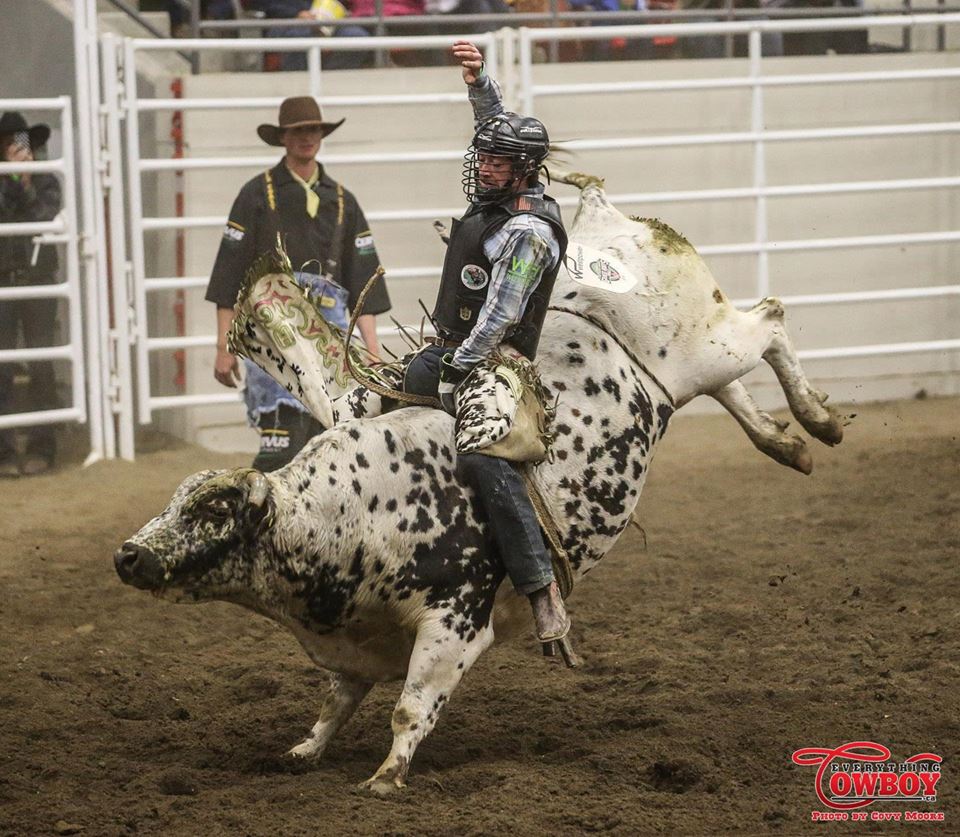 This post was revised on the morning of January 24th at 11:55am MST.

DENVER, Colorado — Heading into this afternoon’s finals of the National Western Stock Show and Rodeo, 2016 Canadian Champion Bull Rider Jordan Hansen sat in the number one spot in the aggregate. Despite a no score on his final bull, the Okotoks man finished fourth at the first big rodeo of the winter.

Hansen won the first round after an 87.5 effort on Cervi Championship Rodeo’s Vitalix White Smoke for $3,799. Added to a second place finish after an 85.5 in round two and the Okotoks man already had $5,952 in his pocket before the finals.

Two points ahead of WNFR qualifier Trey Benton III, Hansen had a shot to make some major headway in his quest to his first WNFR in this afternoon’s finals. Despite the final round buck-off, Hansen earned $8,041 which ranks him 24th in the world as of today.

Canada’s first world champion in the bronc riding since 2002 ranked third heading into Denver’s final round after putting together scores of 85.5 and 81.5 for 167 points on two. That 85.5 for Thurston took second in the second round for $2,912. A no score in the finals meant that was all he earned. All three rounds of bronc riding were won on Calgary Stampede bucking horses, Stampede Warrior for 88 points in round one, Xena Warrior for an 87 in round two and another 87 on Tokyo Bubbles by Cody Wright in the finals.

Sherwood Park, AB’s Kody Lamb rounded out Canada’s hopes in Denver sitting in a tie for fourth in the aggregate coming into the final round of competition. To that point his only check was worth $364 from placing in round two. Lamb’s 83.5 put him fifth in the finals for $350 and second in the aggregate by 6.5 points under 2016 World Champion Tim O’Connell. That second spot paid $4,183 meaning his earnings totalled $4,897 bumping him up to 29th in the Weather Guard World Standings.

Also underway in the next few weeks is Fort Worth where Jake Watson of Hudson’s Hope, BC ranks fourth of all bronc riders. Watson leads the first round after a huge 87 point effort in the first couple days of competition.

Luke Creasy looks to improve on an already solid start to the season, he sits third in the aggregate thus far, 2.5 point behind first.

Jordan Hansen is also on the board here with travelling partner Jared Parsonage. Both got one score on which may or may not work out for them in the long run. This rodeo seems to be very unpredictable from what I’ve seen so far in this business. I couldn’t imagine putting stock together for a month long rodeo.

In the past few weeks, a couple Canucks have won some big checks south of the 49th. Two-time Canadian Champion Tanner Milan won in Odessa, TX for $3,862 and Logan Hofer of Magrath, AB wrapped up the Montana Circuit Finals title for $6,105 which all counts toward WNFR qualification in 2017.

Dennis Halstead of Okotoks, AB worked the MCFR barrel while Elm Creek, MB’s Daryl Thiessen earned a buckle as one of the two selected bullfighters in Great Falls. According to Denny on the way to or from one of our recent Madden Muskrats hockey games, the Kesler Family may or may not have been awarded all three top roughstock title of the event. Even one out of three is worth congratulating.