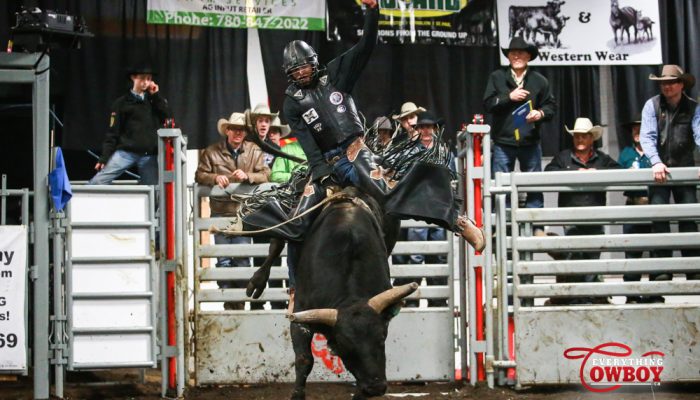 Garrett Green is at it again.

The Meeting Creek bull rider has made a habit of enjoying strong starts to his season. And it’s clear 2019 will be the same.

“I know I’ve had a lot of success early in the year,” the four-time CFR qualifier acknowledged. “Now I just have to keep it going for the whole season.”

Latest in the string of early season positive results was Green’s win at the Rebel Energy Services Bull Riding in Red Deer, Alberta on Saturday night. It marked the third time the second generation hand has captured top honours at the event although this was his first win since the bull riding moved under the CPRA-PRCA banner. Last year Green was second at the calendar year’s kickoff competition.

Green compiled 170 points on two rides, the first, an 84 point effort on Vold Rodeo’s Corona Lite; the second, an 86-pointer on a Sawyer Pro Rodeo bucker called Blue Monkey, good for third in the short-go and enough to edge Jared Parsonage and rookie Riley Gagnon by just one half point for a win that netted Green $3153. His short-round ride wasn’t without its unexpected—and somewhat unusual—challenges though.

“Dennis (Halstead) had just finished an act and the building was still pretty much in the dark,” Green explained. “They told me to nod so I did, but the first couple of jumps were in the pitch black. Then the lights came on but those first couple of seconds—that was a little different.”

Coupled with a second place finish at Regina, Saskatchewan’s CPRA season opener (Agribition Pro Rodeo) back in December, the lanky central Alberta bull rider moves comfortably to first place in the Canadian standings with $6751 in earnings to date.

“I’m always really excited about the start of a new rodeo season and I work really hard in the off-season to get ready for it,” Green noted. This year that prep work included working out, yoga and feeding bucking horses.

“I’m really looking forward to 2019.” he added. “Especially with getting off to a good start like this.”

For Garrett Green those good starts to the season are becoming a habit—and it’s not a bad habit to have.

Next up on the CPRA calendar is the Chad Besplug Invitational Bull Riding in Claresholm, AB on February 23.

The Canadian Professional Rodeo Association (CPRA) with headquarters in Airdrie, Alberta is the sanctioning body for professional rodeo in Canada. The CPRA approves over 50 events annually with a total payout exceeding $5.1 million. The organization holds the Grass Roots Final in late September at Stampede Park in Calgary, Alberta and their premiere event – the Canadian Finals Rodeo (CFR) – at the ENMAX Centrium, Westerner Park in Red Deer, Alberta, October 29 – November 3, 2019. Follow the CPRA on Twitter and Instagram @prorodeocanada, ‘Like’ Canadian Professional Rodeo Association on Facebook or online at RodeoCanada.com.