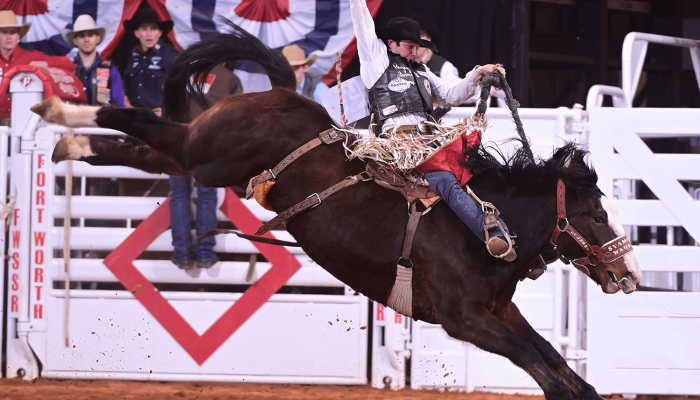 Edmonton, Alberta — If you’ve been paying attention to anything that we have posted in the last few months, you would have noticed that Canadian cowboys have been impressive. One cowboy in particular outshined some of the toughest saddle bronc riders in the world at The American where Wildwood cowboy, Dawson Hay, made all of Canada proud having walked away with the $100,000 cheque. He was 90.5 on All or Nothing in the final four, the same horse that Ryder Wright won on in 2021.

Dawson has defined consistency throughout this rodeo season after winning money in San Antonio, Fort Worth, and now Houston. Dawson made three clean rides at Rodeo Houston, sending him to the semi-finals in fourth place with $3,000 won. Right now, Dawson is sitting 15th in the PRCA world standings with $22,947.58 since money won at The American isn’t included. It would be no surprise to us back home when he starts climbing his way up that list of competitors.

Dawson is not the only Hay brother taking over the leaderboard at these big winter rodeos, with older brother Logan Hay currently sitting 12th in the world standings with $24,582.58. Some of these earnings coming from his second-place win in the first round at Rodeo Houston and round two and three at San Antonio. Logan won’t be joining his brother in the semi-finals in Houston, but we know this friendly family competition will keep going strong.

In addition to the two brothers, cousin of the Hay brothers, Ben Andersen, has been triumphing down south. Andersen has had success in San Antonio, Fort Worth, and is heading to the semi-finals in Houston. Ben was also in the running to win The American and his share of the $2 million dollar side-pot that was eventually won on its own by PBR World Champion Kaique Pacheco. His match-up with Feather Fluffer did not go as planned but his hustle is not gone. Had the young Canadian won the bronc riding event instead of Hay, he would have walked away with $1.1 million, one of the largest checks ever awarded in western sports.

In Houston, Ben made an 86-point ride in Round 2 and was 81 points in Round 3, earning $4,000 in his series. The current world standings read Andersen to be in 32nd place with $13,630.10, but this will undoubtably change as the season progresses.

Joining these men in the semi-finals at Rodeo Houston is Layton Green with $4,500 won and Kole Ashbacher with $4,750 won. Layton has been extremely successful this rodeo season as he is now in the 5th spot of the world standings with $37,527.13 won. Kole is not far behind him in the 8th spot with $33,153.04 won this rodeo season.

Also sitting inside the Top 15 in the in the PRCA standings are Kolby Wanchuk and Lucas Macza. Wanchuk has earned $34,294.30 which puts him in seventh place. Macza sits right behind Logan Hay in the 13th spot with $23,977.46 won. We can’t forget about the timed-event cowboys as we have Jeremy Buhler sitting in 7th spot on the heeling end with $20,645.11 won.

As we go into the semi-finals at the Houston Rodeo, it will be interesting to see how these numbers change.