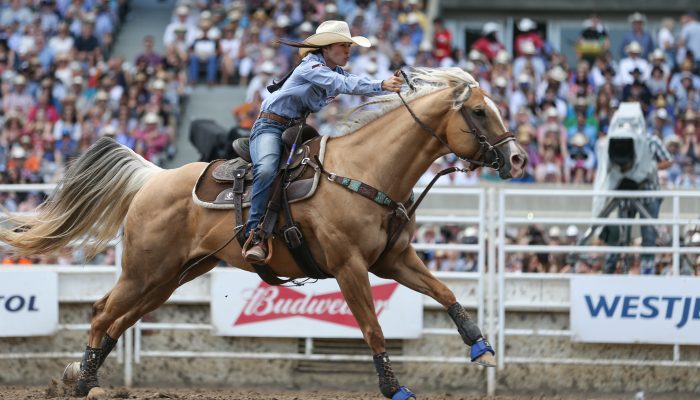 CALGARY, Alberta – The struggle was real on Friday at the Calgary Stampede, as Pool B contestants battled it out for a spot among the top four money winners to advance directly to Showdown Sunday.

Current, and five-time world champion Sage Kimzey was on the bull riding bubble Friday, but the Oklahoma man rose to the challenge, strapping a 91-point ride on Nickle Package, for first place and a $5500 boost.

“We’ve seen him around for a long time. He’s one that gives a lot of guys fits but he always bucks hard, and he’s always going to give you a chance to win,” commented Kimzey. “Those are the kind that us bull riders (need), especially in kind of a sudden death deal like today was. There was a few of us that had to stay on to have a chance to make it forward, me being one of them.”

In fact, in what’s a rare occasion at Calgary, every single one of the bull riders made the whistle Friday afternoon.

Kimzey is glad to have Wild Card Saturday off, and he plans to head to the mountains before Sunday’s big test.

“I’ll take the day for me tomorrow and just go relax and get my mind right for Sunday.”

Shane Hanchey had calculated what he needed to do, as one of four tie-down ropers sitting with $7000 in their Stampede accounts coming into Day 8.

“I had to win something, no doubt,” stated the current Canadian champion. “I had the calf that I thought fit my style and my horse. Cory (Solomon) was seven flat on him yesterday. He leaves and runs. I knew if I got the start down, that I could tie him as fast as I want.”

And it was speedy, matching the fastest time of the week at 6.8 seconds, nettin him an all-important $5500, and sending him straight through to Sunday as one the highest money winners of Pool B with $12,500. That left the rest of the crew scrambling in behind, and when the dust settled, joining Hanchey in a day off on Saturday are Cory Solomon ($12,500); Tuf Cooper ($11,500); and Ryan Jarrett ($8500).

While Kody Dollery was the fastest steer wrestler Friday, with a 3.6 second run, the $5500 bonus was his first Calgary cash, so he’ll be back for Wild Card Saturday.

“I wish this was the first day, but I’m glad I got ‘er done on Day 4 of my pool. We’ll just have to go at ‘em again tomorrow, and then hopefully on Sunday.”

When it comes to Pool B saddle bronc qualifiers, make it three Wrights and a Hay. The roll continues for the young Wildwood hand, and Dawson Hay looked on top of the world when he was first man out and posted an 88 on the scoreboard for his eight seconds aboard Chin Lee. But on this day, Ryder Wright nodded his head for Xemplary Bubbles and managed to eke out one more point, collecting his first day bronze of this Stampede with an 89 mark.

Make it a clean sweep in the barrel racing for Hailey Kinsel and Sister, who dominated for the fourth consecutive day, rounding the pattern in 17.03 seconds. Their Calgary account sits at $22,000, high atop Pool B.

When no one in the Tier 1 Junior Steer riding made the whistle in Friday’s finals, the Stampede championship was shared by two cowboys. Both Landen Horsley of Slave Lake and Dusty Golden of Mayerthorpe had marks of 74.5 on their first ride, giving them the honors.