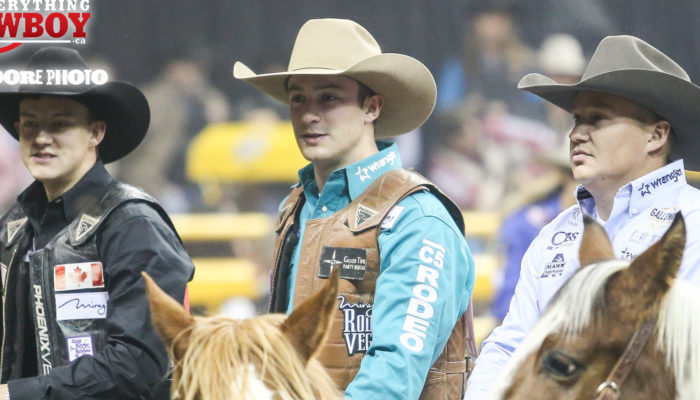 Elliott back to work after first WNFR and Canadian Title

Cowboys are getting ‘back to work’ after what was for many a short break to heal up and get a rest at home. A new season means fresh goals, maybe some different strategies, or even equipment tweaks. But it’s also a good time to look back for some reflection before charging forward.

An inventory of success for Clay Elliott for 2016 would show a banner year – his first Canadian saddle bronc championship, at his first CFR in the open competition, with a $70,685 year end earnings statement this side of the border. Stateside, it started with the RodeoHouston championship and ended with his debut NFR appearance, where he won over $49,000 and a go-round buckle.

While all that is definitely worth savoring, don’t expect Clay Elliott to stay there too long.

That approach served the 22-year-old well at both season finales. At the CFR in Edmonton, Elliott bucked off his first horse, but bounced back to finish second the next night and take two firsts after that, en route to his overall victory.

“I had no idea what the standings were. You always have media telling you this and that, but it went in one ear and out the other, and that was healthy for me.”

When he nodded his head for the first time in Las Vegas, there was the same BO result on the score sheet. It took a little longer to climb back into the win column, but Elliott managed to do that, placing in five of the next six rounds.

“After that fourth round, I finally got comfortable, and got in the habit of winning, and that’s where I’ll start off differently next year, in the first round.” 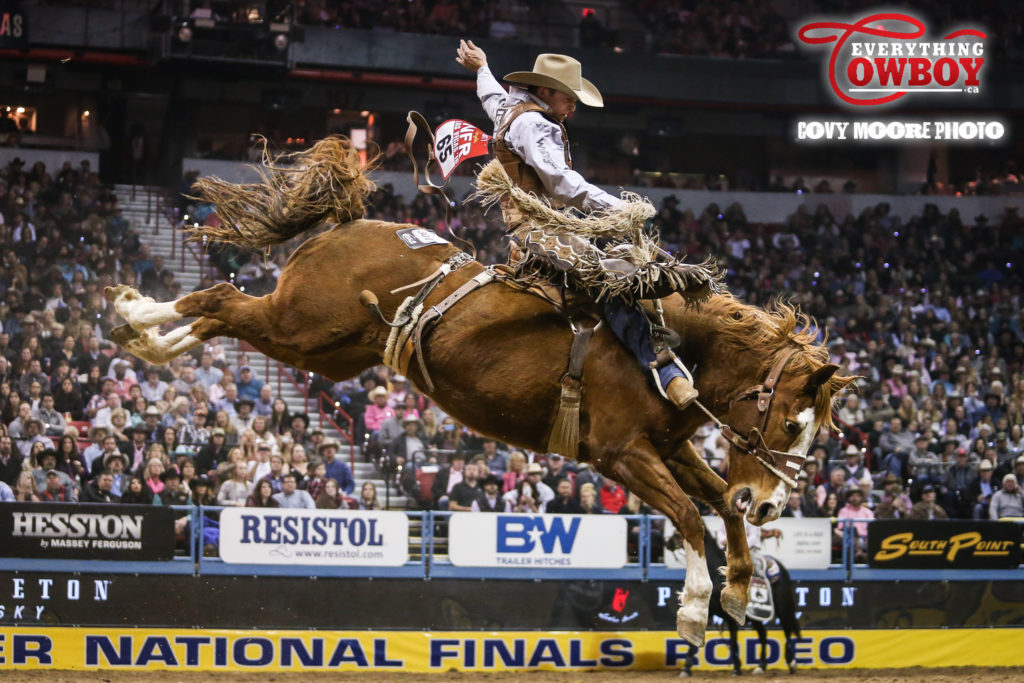 Clay Elliott rides Bar T Rodeo’s Son of Sadie for 86.5 points in Round 5 of the 2016 Wrangler National Finals Rodeo. Photo by Covy Moore.

Whether it’s riding for $26,000 at the Thomas and Mack, or $2,600 at Dawson Creek, all cowboys will tell you they need to have the same approach. Knowing that in your head and putting that fully into practice in your spurs isn’t always easy, as Elliott experienced in Vegas.

“I didn’t relate it to just your everyday rodeo going into it, but after the fourth round was kind of when I realized it was just the same, and it was no different than what I did all year.”

Clay Elliott adds that to the arsenal of wisdom he has already assembled from such greats as his Panhandle State college coaches Craig Latham and Robert Etbauer, as well as younger brother Dan Etbauer, who also was a big help to Elliott.

More than just technique, the veteran bronc riders also shared insight on the mental aspects of the game, and things like how to present yourself to the public. Another key mentor for Elliott for many years has been the legendary champion Winston Bruce, whom he keeps in touch with regularly to stay both grounded and motivated.

When you’re doing what you love, it doesn’t take long to recharge the batteries. So Elliott was chomping at the bit in early January, ready to get back on the trail.

“I had a really good break, but I’m dang sure ready to get rodeoing again,” contended Elliott, who spent time with family at home in Nanton.

“I’m going to spend a little bit more time in Canada earlier on in the season. Last year I was tight on getting my rodeo count in, so I’m going to to try and avoid that issue. I’ll stay up more in May and June.”

It will be easier for him to do that now, since he graduated with his Bachelor of Animal Science degree last May, and won’t have to juggle rodeo and college classes anymore. It will also be a good time for him to warm up his ropes. The talented hand was a two-time winner of the Ultimate Cowboy championship, and would love to be in contention for some All-Around awards in the future. Together with his traveling partner Audy Reed, you can expect to see him in the team roping as well as the tie-down roping.

Although rodeo is an individual sport, Clay Elliott benefits from the support and encouragement of his dad Vern, brother Ty and his family, and the inspiration of his mom Mona, who passed six years ago from cancer. He keeps her picture in his truck to remind him of her courage and love.

“I think about her every day.”

With motivation, professionalism and class, count on Clay Elliott to do more great things in the 2017 rodeo season.