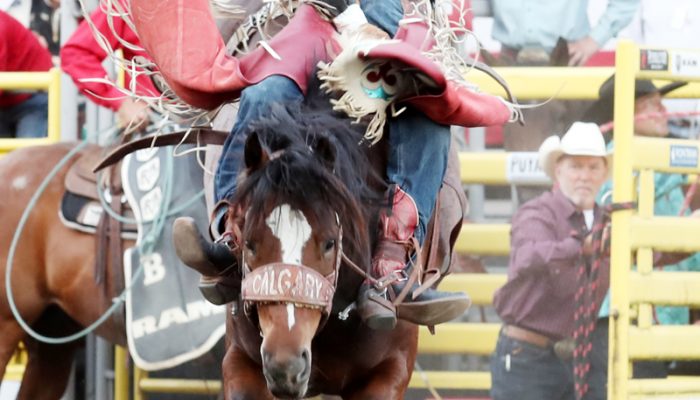 PUYALLUP, Washington – With the best rodeo athletes in the world competing for a historic $1 million purse at the Cinch Playoffs at the Puyallup Rodeo, the action at the first performance did not disappoint.

It was a very important win for Berry who added some much needed money to his checking account. More importantly, those dollars count towards the world standings. Berry, who qualified for the Wrangler National Finals Rodeo in 2020 is looking for another opportunity to compete at rodeo’s championships. Prior to the start of the Puyallup Rodeo, he was 13th in the world standings. The top 15 qualify for the NFR, so he needs to keep winning to secure his spot and is hoping any moves in the standings are up and not down.

Berry’s first NFR qualification was hosted in his home state of Texas because of the pandemic. Last year, he spent a good part of the season out with a back injury that required surgery. He grew up the son of a rodeo cowboy who always dreamed of competing at the NFR in Las Vegas. His success in Puyallup could make those goals a reality.

He will ride again here on Friday night. A solid score will see him among the top four that advance from this group to Sunday’s semifinals. Finding themselves in a similar situation were team ropers Cody Snow and Wesley Thorp.

With Snow, from Los Olivos, California, heading and Thorp, of Throckmorton, Texas, they stopped the clock in 4.2 seconds to win the round. It was a critical move for them also. Snow is 13th in the world, while Thorp, the 2019 world champion is 14th.

Friday’s rodeo will feature the same contestants as were here on Thursday. Their scores and times will be added together to see who advances to Sunday’s semifinals. The top four in each event will spend a little more time at the Washington State Fair as they compete for the championship and the lion’s share of the prize money.

The following are unofficial results from the Cinch Playoffs at the Puyallup Rodeo, part of the Washington State Fair. Payoffs are subject to change.