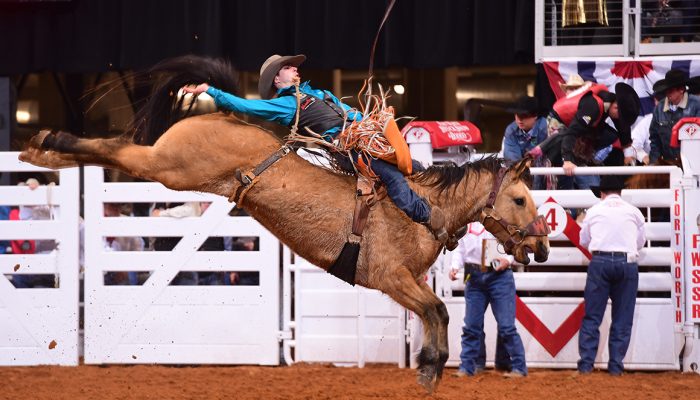 FORT WORTH, Texas (Jan. 23, 2020)— Rodeo X, the Fort Worth Stock Show & Rodeo’s (FWSSR) $100,000 extreme team rodeo competition featured a tight race between teams representing eight of North America’s most historic and prestigious rodeos. This year’s event which moved to the new Dickies Arena had seven of those teams trying to unseat Rodeo Houston, which had won the team title the previous five years.

First, eight contestants competed in each event, with the top four qualifying for a second round where the winner received $10,000 cash. Many of the contestants were current or former world champions and National Finals Rodeo qualifiers and the livestock was among the elite in pro rodeo.

No first-round scores carried over, so the four finalists began on even footing. Richmond Champion, riding for Houston, started the final round, scoring 87 on Stace Smith Pro Rodeo’s Miss Dunny. Cheyenne’s representative, Kody Lamb, only scored 85 points. Leighton Berry, riding for Rodeo Austin, took the lead with 89 points on another Smith horse, Witchy Woman. Laye, the final cowboy to ride, broke into the 90s when he scored 91 points on Stace Smith Pro Rodeo’s Cactus Black, a horse that was selected for December’s National Finals Rodeo (NFR.)

“I just got in the zone and let it fly,” Laye told former world champion all-around cowboy Dave Appleton in an interview on the arena floor. Appleton remarked that Dickies Arena was a special place. Laye agreed, “I feel like a rock star!” He kept that special feeling when Ed Bass, Chairman of the Board of the FWSSR, handed him $10,000 in cash.

The finalists in steer wrestling clocked times of four seconds or less. 2019 World Champion Ty Erickson, riding for Denver, was the slowest of the four with a time of 4.02 seconds and NFR veteran Kyle Irwin, riding for Calgary, was the fastest with a 3.39. Erickson, who competed first in the final round, put his steer on the ground in 3.99 seconds and held on to win the event, giving Denver its second event winner of the night.

The saddle bronc riding featured eight rides marked between 84 and 88.5 points. Austin team member Sterling Crawley led the pack on Brookman Rodeo’s Satisfaction. Four cowboys marked 87.5 but only three could join Crawley in the final round. Denver’s Coburn Bradshaw lost the tiebreaker, making that the only event where Denver didn’t send a team member to the final four.

Oklahoman Emily Miller, riding for Rodeo Austin, had the fastest barrel racing time of the first round – 16.435 seconds. She clocked even faster – 16.407 – on her gray gelding Chongo to win the $10,000 prize.

But Spears made the most of that decision. He was the only cowboy to ride in the final round, scoring 86 on Andrews Rodeo’s bull Breaking Records and winning the $10,000. Second through fourth place was determined by the number of seconds before disqualification.

The team race was tight with two events won by Denver, two by San Angelo and one by Austin. Denver’s bull rider Brody Yeary cinched the title for his team. Although he didn’t get a score, he finished second in the bull riding by virtue of staying on his bull less than a second longer – 84-hundredths to be exact – than third-place finisher Trevor Kastner.

The World’s Original Indoor Rodeo begins its new era in Dickies Arena at 7:30 p.m. Friday with the first of 18 rodeo performances.