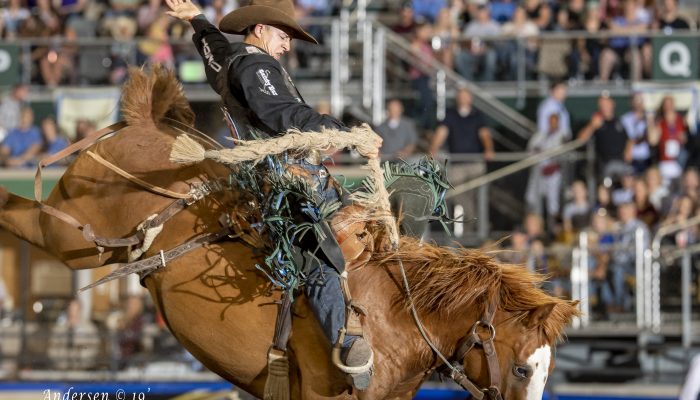 SALT LAKE CITY, Utah — The World Champions Rodeo Alliance (WCRA) concluded their third $1,000,000 major paying out more than $1,125,000 to rodeo athletes during the Days of ’47 Cowboy Games and Rodeo (DO47).  A total of 288 athletes competed in the five-day performance in Salt Lake City with 90 athletes battling it out in the gold medal championship round on Wednesday night in front of a sold-out crowd. With the conclusion of the DO47, WCRA and their partners have paid out more than $5,578,890 to athletes since May 2018.

Gatesville, Texas native Jordi Edens made history when she became the first breakaway roper in DO47 history to win a gold medal and $50,000 when she conquered Jackie Crawford (Stephenville, TX) and ten other contestants with a 2.58 second time.

The team roping pair Ty Blasingame (Casper, WY) and Kyle Lockett (Visalia, CA) found themselves on the winner’s podium in the number one spot after a 5.35 second run. The duo who both earned $50,000, defeated Tanner Tomlinson (Angleton, TX) and Will Woodfin’s (Marshall, TX) 5.98 second place time.

Ty Harris (San Angelo, TX) was crowned DO47 tie-down roping champion when he bested with a 7.60 second time.

Oklahoma Cowboy Trevor Kastner (Roff, OK) scored an 87.25 to secure the number one spot and $59,000. Boudreaux Campbell (Crockett, TX) notched a 83.25 point score, good for the second place spot. After no qualified rides, Keyshawn Whitehorse (McCracken Springs, UT) earned the silver medal due to the tie being broken by his 90.75 point score from Saturday night during the semi-finals round.

On Sunday, July 28 fans will be able to tune into the Days of ’47 Cowboy Games and Rodeo Gold Medal Round on a CBS network broadcast at Noon E.T.

All results from the event can be found here.

Courtesy of the WCRA.

WCRA is a professional sport and entertainment entity, created to develop and advance the sport of rodeo by aligning all levels of competition. In association with PBR, WCRA produces major rodeo events, developing additional opportunities for rodeo industry competitors, stakeholders and fans. To learn more visit wcrarodeo.com. For athletes interested in learning more about the WCRA Virtual Rodeo Qualifier, visit.wcrarodeo.com