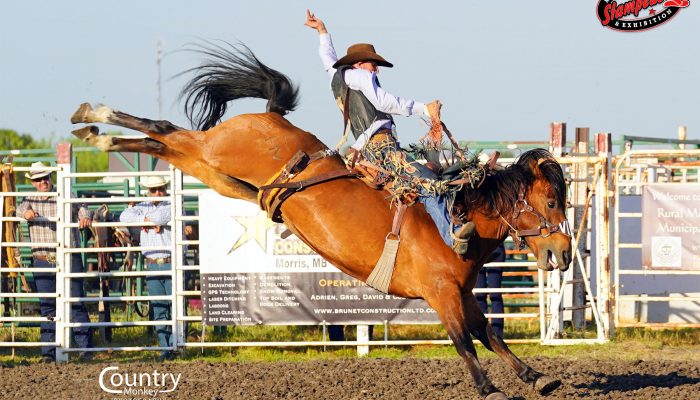 July 26, 2022 l Airdrie, AB- For saddle bronc rider, Lachlan Miller, the end of the 2021 regular season was, to say the least, stressful. It came down to the last rodeo of the season for the Australian who has made Canada his home since 2018.

“I rode in the second performance at Hanna and then had to wait to see what happened with Kolby Wanchuk on the last day to find out if I made the CFR,” the 29 year old hand recalled. And though things went Miller’s way that time around, he’s quick to acknowledge that he wouldn’t mind getting a CFR berth locked up just a bit sooner in 2022.

“Yeah, last year was fun but I’d like to be a bit safer, a bit sooner this time, maybe not leave it to the last minute.”

Miller, who was 11thin the Canadian standings heading into the weekend’s action, took a giant step toward punching his ticket to this year’s CFR as he posted wins at both the SMS Equipment Pro Rodeo Tour stop at the Manitoba Stampede (Morris), then added another first-place finish at the Rockyford Pro Rodeo in Alberta as well. For the likeable Airdrie resident it was a weekend of firsts.

“That’s the first time I’ve won two rodeos in a weekend and it was also my first Tour win as well,” Miller noted.”

The third year pro posted an 84 score on the Wayne Vold bronc (Vegas) for a $2472 payday. “My mates told me to have fun on that horse, that he’d make it easy for me. And that’s exactly what happened.” He followed up with a 79 point ride on Northcott-Yule’s Smokin’ Hippy for the Rockyford win and another $770. The $3244 haul will bump the Australian comfortably into the top ten in the Canadian standings.

As for the challenge of butting heads with the tremendous crop of young Canadian bronc riders (five of them in the top fifteen in the world at present), Lachlan Miller relishes the challenge. “I just see it as riding with my mates and I’d rather be riding up to guys that are that good than be riding down to guys that are just okay. These guys make you want to be better.”

Miller wasn’t the only two event winner on the weekend. Manitoba tie-down roper, Stran Dunham, was the top money earner courtesy of a 9.0 second run to take top spot in Morris and $2368 and an 8.0 winning run at the Moose Mountain Pro Rodeo in Kennedy, Saskatchewan to add $1881 for a solid $4240 injection to the bank account

And not to be outdone, team ropers, Rhett Haveroen and Walker Galloway put together a couple of firsts as well—their 5.9 second run at Morris earned the pair $1735 each while a 5.2 run at Rockyford netted the Alberta duo $1297 each for a weekend total of $3043 per man.

It’s a busy week on the Canadian rodeo schedule with the Medicine Hat Stampede kicking it off July 28-30, the Strathmore Stampede July 29-August 1, the Hardgrass Bronc Match in Pollockville July 30, the Bruce Stampede July 31, and the High Prairie Stampede August 2 and 3.