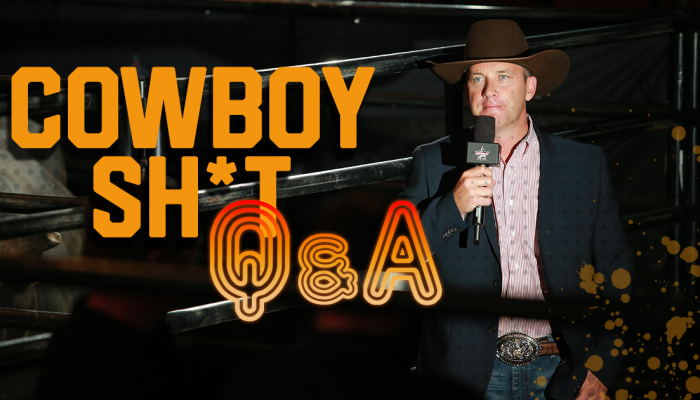 CALGARY, Alberta — This is the beginning of a series this winter, presented by COWBOY SH*T™️, transitioning out of 2020 and into 2021. It features a number of the key players in western sports in Canada and beyond looking forward through the Covid-19 pandemic and a hopeful return to normalcy in the coming months.

TED STOVIN: When is the PBR in Canada planning to return to competition in 2021?

JASON DAVIDSON: Our first scheduled Monster Energy Event is in Regina June 16. we pushed out all the Monster Energy Tour (MET) events, with the exception of Regina, to the third and fourth quarter.

TS: What events are on the schedule so far in 2021? How many do you expect?

JD: We have ten events scheduled for the Monster Energy Tour. The number of TPD events are still pending due to covid restrictions.

JD: We have some exciting news to announce for the 2021 season. The PBR Canada Team has been working diligently on a couple new venues for 2021.

TS: What will the Monster Energy Tour look like in 2021?

JD: We have pulled back on the number of events out east due to the current climate of government restrictions. We have Ottawa and London scheduled but we are able to pivot to the west with a couple venues to keep our events at 10 for TSN. We learned from 2020 that plan A and B is not enough during something like this so we have planned A to Z.

TS: What was the highlight of 2020 for you in consideration to the PBR in Canada?

JD: The highlight for me was how the PBR Canada Team came together to deliver our product to the riders, contractors, sponsors and most of all, our fans! Everyone bought in and I think it just reaffirms that we have the best team in western sports.

TS: What did it take to be the only western sport in Canada to crown a champion in 2020?

JD: I can honestly say that there were times it would have been so easy to just throw the towel in and wait this pandemic out. [PBR CEO] Sean Gleason and US Team led the way in Professional Sports across the board. They were a true inspiration for what we needed to deliver here in Canada, we just followed in their footsteps.

TS: What do you see PBR Canada events looking like in 2021?

JD: Well Ted your guess is as good as mine today… We hope that come spring the vaccines are effective in managing this virus.  This lockdown has punished a lot of people in our industry and we need to get them back to work. I think PBR Canada will reach another level in 2021.

TS: Why was the PBR in Canada able to have events in 2020 when there were no professional rodeos?

JD: I think that comes down to the television deal we have with TSN, our National Partners are to thank for that.

TS: What is holding rodeo back in your opinion?

JD: I’ve been away from rodeo, in Canada, long enough now that I don’t even recognise half of the names in the standings. I wouldn’t be able to comment on that as I just haven’t got any knowledge of their business.

TS: Based on your Twitter comment, why do you think rodeo should be based on points? Why do points work in the PBR? How would you see that going?

JD: Like I said in my tweet, bonus money is just that, it’s bonus money. You cannot award $100k or $125k at a single event if it represents 40% of season earnings to be a World Champion. In Canada, if the bonus money from Calgary counted and you are a Calgary Stampede Champion, then everyone else is competing for second place at the end of the year. I look at Ryder Wright’s NFR, it was almost flawless, he won the average, placed in nine rounds and won five of them. He needed all of that to beat Wyatt Casper for the World Title because of his bonus winnings at The American.

TS: How would a season points system benefit or hinder Pro Rodeo?

JD: Points reward consistency. I will leave it at that.

TS: What about the ground money counting in the bull riding?

JD: It should not count either, there is too much money at stake at the NFR.

TS: You represent Stetson Wright, now a three-time World Champion, talk about how that relationship came to be and the success he’s seen so far. This guy is the new face of professional rodeo and you have a part in it.

JD: The entire Wright Family are tremendous people, it is truly a pleasure and adventure to work with them.  When I was working the Calgary Stampede I always admired how Cody Wright handled himself in and out of the arena. We were camped close together at the Stampede there one year. What I admired most was his preparation and commitment to winning and being a father. Rusty, Ryder and Stetson were just little kids ten years ago but you should have seen them study their Dad getting on every day at Stampede. I was right there watching it and it captivated me. I said to myself, these kids are getting schooled everyday by the two-time champ of the world.

I approached Cody about a Wrangler deal and I want to say it took about a year to get Cody interested. By this time the boys were entering the novice events at Stampede and cleaning up. Cody’s brothers Jake, Jesse and Spencer were making names for themselves in the PRCA so I really saw the long-term success that this family was destined for. And the rest fell into place, all of Cody and ShaRee’s kids have won National High School Rodeo Association (NHSRA) titles and Ryder and Stetson have multiple PRCA World Championships. Rusty is a Calgary Stampede Champion and I am putting my money on him winning another world title in 2021.

“Comparing the timed events to the rough stock events is like trying to compare baseball to football. It is two completely different things. The rough stock was what I was so captivated by my whole rodeo career, and it is so fun to see Stetson’s talent,” – Ty Murray told PBR.com’s Justin Felisko on Monday after the Wrangler NFR’s conclusion.

As for Stetson, he will accomplish whatever he wants, he is that good. Each boy has their own traits that make them superior at what they do. Rusty has the most positive and appreciative attitude, Ryder has ice water running through his veins and once Stetson starts shaving he will be an absolute wrecking ball in two rough stock events. Cody and ShaRee have been very supportive with me managing the boys and I are very thankful I have ShaRee’s help. She deserves a gold buckle!

TS: How do the endorsements of the PRCA and PBR compare having been part of them both.

JD: PBR’s TV deal makes it a lot easier to negotiate as well the fact that it is in more mainstream markets.

TS: What is your role with the athletes? What have they said is the most value you provide to them? What are your thoughts on those who maybe haven’t had help in the past and left the sport without much to show for it even though they competed at a high level?

JD: I handle securing and negotiating endorsement contracts… this includes everything from what the athlete is paid to what the client expects from the athlete. It’s a tough sell in rodeo with no TV contracts. You have company’s like Wrangler, Cinch and Boulet Boots that do invest in the athletes because it is a great platform for them in the industry but for other companies it is almost just a love for the sport or that particular endorsee.

For the ones that left the sport they likely didn’t have that fire burning inside to be the best if they opted to throw the towel in!

TS: Comparing rodeo to hockey, you started in the rodeo and bull riding side of things with Aaron Roy, right? Or who was your first client on the western sport side of things?

JD: Matt Roy was my first bull riding Client. When I retired from bullfighting I was doing well with endorsements and convinced a lot of my sponsors to support my agency idea with Matt, Aaron and Nathan [Roy].  Aaron took it to the next level with his PBR career for 3D Bull Riding, we had some really good years. I got into hockey 11 years ago and had the fortune of having Micheal Ferland as my first Client. The work that went into him resulted in some much earned and needed respect in a whole new world for me.

TS: How do the two worlds compare? How are they the same?

JD: Hockey pays you a commission on salary, there are endorsement deals as well but salary negotiations are the focus. My job as a NHLPA Certified Agent, is to make my players the most money I can. For Western Lifestyle Athletes it’s straight commission on endorsements and licensing deals. It really is two totally different worlds but that’s what I like about it, it keeps you sharp on both sides!

TS: Tanner Byrne is working closely with you now that he’s not competing anymore and currently fighting bulls. What is his role in the agency? Who’s he looking after?

JD: I wasn’t able to focus on the Canadian side of my Western Lifestyle business and that is where Tanner came in.  Tanner has represented some of the most iconic brands in the world such as Monster Energy and Levi’s during his time on the UTB. He was a natural fit to come on board with 3D Bull Riding and manage the PBR Canada Riders as well as Zeke Thurston and Aaron Mercer. I trust him to do the job and he has the respect amongst our athletes that serves him as a mentor as well.

COWBOY SH*T™️ is a proud sponsor of Everything Cowboy Inc. and vice versa.