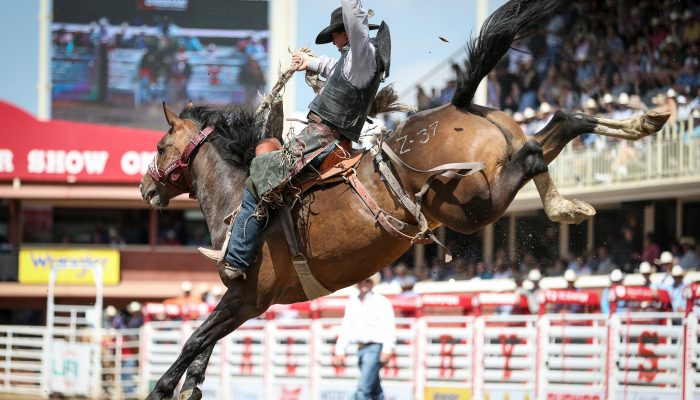 CALGARY, Alberta – The rich got richer on Day 7 of the Calgary Stampede.

The man with the midas touch in steer wrestling is Kyle Irwin. He just can’t get enough of the Calgary cash, coming out early in the round and throwing down the gauntlet in 3.6 seconds. This time the rest of the field came close, but didn’t unseat his lead, so for the second straight day he made the victory lap.

Irwin’s dominating performance has already padded his Calgary account with $15,500, and that’s got his family doing some wishing and dreaming.

“My wife, already this morning, was looking at some stud horses she wouldn’t mind breeding (our horses) to this next season, and some other things. And I was like ‘let’s just slow down a tick’ – we’ve got to make sure we pay the van payment and the truck payment first!”

Make it two in a row for the PBR’s number one man this season. Jose Vitor Leme, who is among the Brazilians now living in Texas to ride bulls, rode out an eight second storm on Rebel Soul for a spectacular 91 points.

“I’d seen some videos of him,” said Leme, about the bull he drew. “I just thank God for another great ride today here. I’m very happy for this.”

In the barrel racing, it’s shaping up to be the Hailey Kinsel show. Her amazing horse Sister made a smooth run around the arena, stopping the clock in 17.04.

Last year, Kinsel won three of the four days in her pool and she’s already got three victories this year, with one day to go.

“She does really well here. I don’t know what it is about this pen, but she just loves it here, so it’s good for us.”

Kinsel’s Calgary earnings already sit at $16,500, far ahead of the rest of her counterparts in Pool B.

It was another stellar day of saddle bronc riding. And it looked like Dawson Hay was heading to the stage for a third straight bronze, after he strapped a whopping 89 mark on a horse called Patches. But then his traveling buddy, and another rising Canadian bronc riding star, Kolby Wanchuk, nodded his head on a Calgary horse called Zoaria Hills. It was an exotic flight pattern, but Wanchuk piloted his way through it, landing with a half point more. The 89.5 gave him his first Calgary cash, a $5500 bonus.

“She was real bucky today,” stated Wanchuk, who turns 23 next week. “I know she’s got some moves and some different things going on, but she was throwing the power to me and it felt good.”

Hay’s second place payday keeps him well ahead of the Pool B pack with a tally of $15,500.

The fastest time of the week in the tie-down roping was turned in by Texan Timber Moore, in just 6.8 seconds.

“I was sure enough behind the 8-ball,” admitted Moore, the 2015 Stampede champion. “I was needing to win something today just to give myself a chance for tomorrow, so I don’t end up in the Wild Card. Hopefully I can win something tomorrow to get through to Sunday.”

Moore’s earnings sit at $7000 now after the win, but it’s defending Stampede champion Tuf Cooper who’s been steadily placing and is the frontrunner at the pay window, with $11,500.

“It’s been a long time coming,” sighed the Manitoba raised cowboy. “When you don’t win a cheque the first two rounds, it kind of starts playing on your mind. I’m pretty fortunate to have a good wife, to keep me all there when things don’t go so well.”

As it turned out, Larsen’s mark was surpassed by the Pool B first day winner, Tanner Aus, when he spurred to an 88 on Bloody Mary, so the Minnesota man collected the $5500, giving Larsen $4500. Aus is the overall leader now with $15,000 won.

There’s one more round for Pool B contestants to secure a spot among the top four to move directly to Championship Sunday.