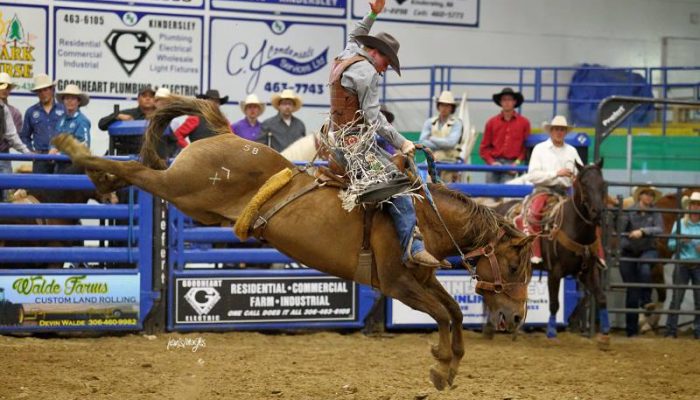 “You’re not just a cowboy, you’re a rock star at the Stampede and it takes your breath away a little bit,” recalled Zweifel during an interview with Everything Cowboy.

The weeks that followed that incredible Stampede victory were about as surreal as it gets for a 20-year-old Saskatchewan cowboy, especially when you’re on the road to another rodeo literally that same night.

“Everybody kind of keeps telling you how cool it is, but it doesn’t really hit you until you’re back at home looking at your bronze and really realizing what all happened. It was unreal,” he said.

But now, nearly a month later, it’s back to reality as the young bronc rider turns his focus towards winning another one of the year’s most important rodeos on the Novice circuit: the CCA Finals Rodeo.

“It’s my first year really riding CCA hard. It’s been awesome. Stock’s been awesome, road’s been good. A lot of driving with that CCA but it’s been worth it for sure,” said the Paradise Hills native, who at the time of writing is in fourth place in the Saddle Bronc standings.

“Being a Saskatchewan boy, I’ve always wanted to get my CCA card, but I live up North of Lloydminster, so the LRA and the WRA – the Lakeland and Wildrose Associations – they just made more sense,” explained the first-generation rodeo cowboy.

For Zweifel becoming a professional rodeo cowboy has been a lifelong dream.

“Back when I was itty-bitty rodeo was still on TV and I always was just extremely fascinated by rodeo. I always said since I was a little kid I was going to be a bronc rider or a bull rider – I was always going to be a rodeo cowboy,” he remembered, adding that his family has been a huge support to him throughout his journey.

Now, years later, Zweifel is on the verge of achieving that goal, as he sits sixth in the CPRA Novice Saddle Bronc and is ready to take his first shot at the CCA crown this October.

“I’m right up there for season leader, even though I haven’t hit as many (rodeos) as the rest of the boys. To get that season leader would be awesome,” said Zweifel on how he plans to continue his run towards that big week in Swift Current.

“I’m super excited that my first year making the finals is the first year in Swift Current. It’s really cool, you know? End of an era. Birth of something new and different.”