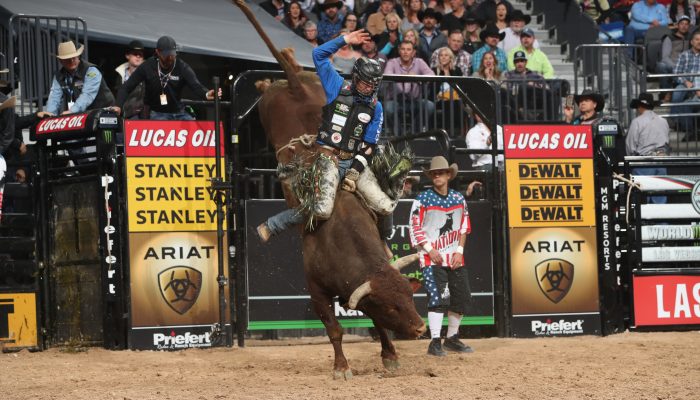 LAS VEGAS – Ahead of the 2019 PBR (Professional Bull Riders) Unleash The Beast World Finals, the 40-man field set to ride inside T-Mobile Arena on Nov. 6-10 has been announced, with two Canadians, Dakota Buttar (Kindersley, Saskatchewan) and Jared Parsonage (Maple Creek, Saskatchewan) qualifying to the most prestigious event in bull riding.

Presently ranked No. 27 in the world, the Saskatchewan man went 20-for-49 (40.82%) during the Unleash The Beast regular season, recording five Top-10 efforts, including a seventh-place and tenth-place finish at the Major events in Nashville and Los Angeles, respectively.

Buttar gained significant ground in the world rankings courtesy of his dominance on home soil, which led him to briefly hold the No. 1 ranking in the Canadian national standings. Winning a league-leading five PBR Canada events, he amassed 445 world points in going an impressive 25-for-39 (64.1%). He is currently No. 2 in the national standings, a slim 32.49 points behind leader Parsonage.

For Parsonage, the qualification will mark his first berth to the PBR World Finals.

The 2019 season also bore witness to the Maple Creek man’s Unleash The Beast debut. After making his first appearance on the PBR’s premier series in January in Glendale, Arizona, he made two additional appearances during the Unleash The Beast second half in Anaheim, California, and Fairfax, Virginia.

Buttar and Parsonage’s qualification comes on the heels of 10 Canadian bulls being selected by PBR Livestock Director Cody Lambert to buck at the PBR World Finals.

PBR also revealed the World Finals bullfighters that will take to the dirt to protect the best bull riders in the world. Canada’s own Jesse Byrne will return to the event, joined by Veterans Shorty Gorham, Frank Newsom and Cody Webster.

With only 1,793.16 points separating the Top 3 riders heading into the 2019 PBR Unleash The Beast World Finals, slated to take over T-Mobile Arena from Nov. 6-10, the five days of action portends to be one of the most fiercely contested World Championship races in PBR history.

The 2019 season has kept fans on the edge of their seats with intense ups and downs, as the world title race has dramatically unfolded. Each of the top three ranked bull riders have held the world No. 1 ranking throughout the 26-week season. As the top bull riders in the world take to the dirt to challenge the rankest bulls on the planet, the competition will reach an all-time high with a million dollars and the coveted gold buckle on the line.

Historically, any rider within 2,000 world points of the world No. 1 ranking at the start of the World Finals is a legitimate contender for the season’s World Championship. With 3,300 points available across the five days of competition, the championship is truly up for grabs among this year’s top three PBR cowboys.>

In the Rookie of the Year race, just 499 points separate the top three contenders heading into World Finals week. Standings leader Dalton Kasel, who took the season by storm quickly climbing the rankings from No. 43 to No. 7 in three months’ time after making his debut in Tulsa, will look to maintain his No. 1 ranking, while No.2 Daylon Swearingen and No. 3 Mason Taylor will be on the hunt to erase the Texan’s 410.41 and 498.75-point leads, respectively.

The 35 qualifiers via the world standings who will put it all on the line in the heart of the Las Vegas Strip for a chance at collecting their share of the more than $2.5 million in prize money are:

While two-time PBR Word Champion Mauney qualified for the most prestigious event in bull riding, he is tentative pending injuries sustained at this past weekend’s Pendleton Whiskey Velocity Tour Finals. Should Mauney ride this will mark the grizzled veteran’s 14th consecutive qualification for World Finals. The first alternate is Colten Jesse (Konawa, Oklahoma).

Joining these 35 men at World Finals are the five qualifiers from the Pendleton Whisky Velocity Tour (PWVT).

Each rider will ride one bull per night during Rounds 1-5 from Wednesday through Sunday. Scores from the five rides will then be combined, and the Top 15 riders will advance to the championship round following the completion of Round 5 on Sunday, Nov. 10. The rider with the highest total score from the six rounds will earn the PBR World Finals event title and $300,000.

CBS Sports Network will broadcast every round of the PBR World Finals live at 10 p.m. ET, Wednesday-Thursday, 11 p.m. Friday-Saturday and then at 4 p.m. on Sunday.