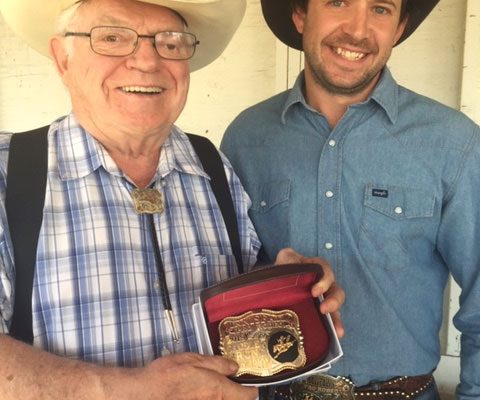 Jake Brown couldn’t wait to get his new buckle on.

The Eckville, Alberta bronc rider no sooner received his Championship buckle from Innisfail Pro Rodeo founder, Jack Daines, than he was pulling off the old buckle and getting that new one firmly in place.

“This means so much to me,” the second generation cowboy grinned. “This is the best moment of my pro career.”

The central Alberta hand put together an 85 point ride on Outlaw Buckers’ American Sister to share top spot with last year’s champion, Zeke Thurston to cash a cheque for $2018 and take home the beautiful Contway bronze as well.

“I filled my permit on that horse more years ago than I care to remember and he was really good today,” Brown told a packed house (hillside and grandstand) at Innisfail. “And now to win this amazing rodeo—I’ll never forget this for sure.”

The win propelled the 30 year-old into the top twenty in the Canadian saddle bronc riding standings and could provide the impetus to pursue a first trip to the CFR.

– 2013 Canadian Champion steer wrestler, Clayton Moore enjoyed a lucrative weekend – earning $1967 for his winning 4.4 second run at the Bonnyville Pro Rodeo then adding $1938.35 (3.9 sec run) for a share of first at Innisfail. The $3905 total will move the Pouce Coupe, BC cowboy into the top five in Canada. And Botha, AB bull dogger, Matt Mailer, was part of the first place split at Innisfail and added a second-place finish at Bonnyville for a total of $3648.

– A couple of ropers from south of the border made the most of their weekend appearances. Three-time World Tie-Down Champion (and 2010 Canadian Champ) Tuf Cooper was a rapid 7.2 seconds at Innisfail, good for first place and $2411. (The lanky Texan grinned as he acknowledged that despite several previous appearances at the central Alberta rodeo over the years, 2019 was the first time he made it to the pay window.) 2004 PRCA Tie-Down Rookie of the Year, Caddo Lewallen (Morrison, OK) added over $4000 to his bank account courtesy of a second-place cheque at Innisfail (7.6 secs) and a one-two split at Bonnyville (7.9 secs).

– Over the years, fans have wondered why Pro Rodeo Canada times the barrel race to the thousandth of a second. That practice was validated once again on the weekend as rookie Stacey Ruzicka edged CFR-NFR qualfier Jackie Ganter by one one-thousandth of a second for the Innisfail win (15.927 sec run) and $3083.20 (This is the third pro rodeo win for Ruzicka in as many weeks.)

Check out www.RodeoCanada.com for complete results.

The CPRA schedule is getting busier as we move into the summer months. The 66th Wainwright Stampede (a Finning Pro Tour stop) runs June 20-23. Sundre Pro Rodeo celebrates 40 years of rodeo June 21-23 and historic Guy Weadick Days in High River is slated for June 22-23.