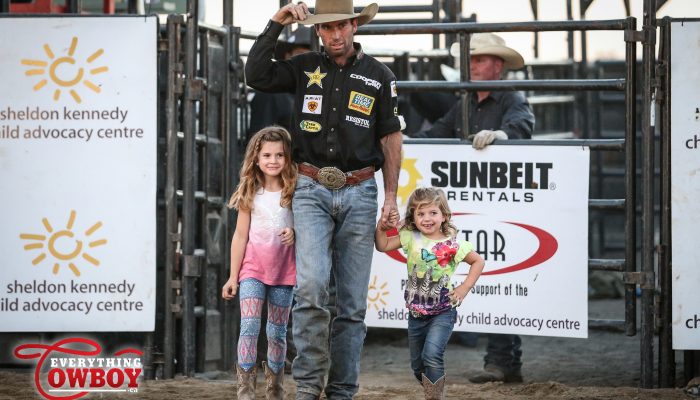 The 34-year-old began his night with a fifth place effort in Round 1, riding On The Fringe (Dynamite Buckers) for 80.5 points.

In the short go, Vieira delivered another qualified, scoring 88.5 points aboard Stunt Man Ray (Girletz Rodeo Stock) to win both the round and event.

Currently ranked No.18 in the world, Vieira earned $4,536.85 and 60 world points. He now trails fellow countryman and world No.1 Eduardo Aparecido (Gouvelândia, Goiás, Brazil) by fewer than 2,000 points.

Second and third at the event were also claimed by riders from the elite Built Ford Tough Series, ranked within the Top 35 in the world standings, who logged 2-for-2 outings.

2004 World Champion and current world No.25 Mike Lee (Decatur, Texas) finished third, backed by a Round 1 winning, 84.5-point ride aboard Hard Rock (Big Chief/Armstrong). In the championship round, Lee became the third rider of the event to deliver a perfect performance, riding Warlock (Girletz Rodeo Stock) for 78 points.

Fraser Babbington (Gisborne, New Zealand) finished fourth. In Round 1 Babbington was second after riding Grey Eyes (Dynamite Buckers) for 83.5 points. He left the event with $1,710.63 and 15 world points.

Rounding out the Top 5 was Brant Atwood (Pampa, Texas), whose night was highlighted by his third place, 82.5-point ride aboard Parachute Pants (Vold Rodeo/Prescott) in Round 1. Atwood earned $1,071.00 and 10 world points for the performance.

Cole Young (Fairview, Alberta) was the event’s highest finishing Canadian. Young rode Just Sayin (Vold Rodeo/Prescott) for 80 points in Round 1 to finish seventh overall at the event and earn $312.38.

After a three-day stretch in Calgary, the TPD now heads to Edgerton, Alberta for the Edgerton PBR Bullarama on Friday, July 7. Action at the Edgerton Sports Grounds begins at 7:00pm MST.

Official results from the Bullbustin’ in Support of the Sheldon Kennedy Child Advocacy Centre on July 6, 2017.

Professional Bull Riders (PBR), which has events in five countries and is available in more than 400 million homes globally, has competed in Canada since 1996. The PBR Canada Touring Pro Division is made up from of grassroots level and small town markets of bull riding in Canada. Points earned at Canadian events count towards qualification to the elite PBR Canadian Championship. Upon the conclusion of the Championship, the bull rider with the most regular season and Championship points is crowned the PBR Canada Champion. Points won at all Canadian events count toward qualifying on the prestigious PBR Built Ford Tough Series and PBR Built Ford Tough World Finals in Las Vegas, Nevada. Rogers Place in Edmonton, AB will be the first-ever Canadian host of the PBR Global Cup on November 9-11, 2017. The three-day event will feature the world’s best bull riders from Canada, the United States, Mexico, Brazil and Australia, all competing for their country and a Canadian-record purse of $1,000,000, the second-largest payout in North America next to the PBR World Finals in Las Vegas. For more information on PBR Canada, go to www.pbrcanada.com, or follow on Facebook at www.facebook.com/pbrcanada or on Twitter at http://www.twitter.com/pbrcanada