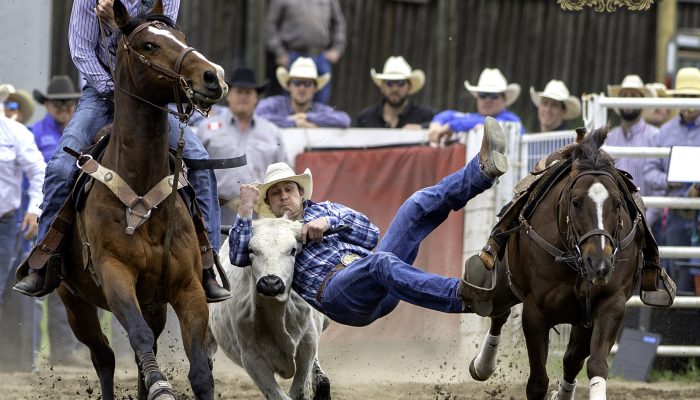 Brendan Laye knew he was running out of time.

The four-year pro responded to the urgency of the moment with a 3.7 second run at the Armstrong IPE and Stampede, which hosted the last Finning Pro Tour Rodeo of the season, and the Finning Pro Tour Finals Sept 1. Laye earned the Tour rodeo steer wrestling win and $3790. He followed that up with an even quicker 3.2 second effort to top the field at the Nicola Valley Pro Rodeo in Merritt and add another $1513. The $6300 haul jetted the 2016 CPRA top rookie up almost ten spots in the Canadian standings, from 16th place entering the weekend to a comfortable spot well inside the top ten, virtually assuring Laye of a late October/early November date in Red Deer (CFR ’46).

“With the position I was in, I knew I had to have a big weekend,” the Consort bulldogger acknowledged. The “position he was in” was about $2000 out of the 12th and final qualifying berth with only a handful of rodeos left in the 2019 regular season. The good news for Laye was that the Armstrong Stampede, followed by the Finning Pro Tour Finals, made up the two biggest remaining potential paydays on the CPRA schedule.  Coupled with the Nicola Valley Pro Rodeo, the BC run is always a critical moment in the long, challenging Canadian rodeo season.

Laye was ready. “I just wanted to be excited about the things that could go right and not worry about the things that could go wrong,” the 2018 PRCA Steer Wrestling Rookie of the Year noted. “I was riding (Curtis Cassidy’s Steer Wrestling Horse of the Year) Tyson and I knew he’d give me a good chance to win. I guess it worked out pretty well. There’s a lot less stress for the rest of the season, that’s for sure.”

“We’re not just cousins, we’re buddies,” remarked Brendan Laye, “going back to starting out in the Wild Pony racing together. We cheer each other on and it’s pretty cool when we all have a weekend like this one.”

Lacombe, AB barrel racer, Justine Elliott, is enjoying a fairy-tale year. The 17 year old high school senior and her cow-bred mare, Blondie, are not only headed to their second CFR, but they’re doing so in style. With solid placings at both Armstrong (15.890 secs/7th/$997) and Merritt (16.254 secs/6th/$464), and a winning 15.844 sec run at the Finning Pro Tour Final ($4800), Elliott added an overall $6261 to her bank account and is well placed to earn Season Leader barrel racing honours.

“I went into the Finning Pro Tour Finals just trying to have a good run, and let whatever happened, happen,” explained the young horsewoman. “I wasn’t one bit expecting to win it. The field was very tough. I tried to stay off Blondie until right before my run as I was nervous and didn’t want to make her worried. But Blondie likes the crowd and smoked a run.” Elliott grinned.

The duo will enjoy a more limited schedule for the next month, then start preparing for CFR at the start of October. With a 2018 CFR appearance behind her, Elliott is heading to this year’s Finals with a better idea of what to expect.

It was just six weeks ago that Jake Burwash posted his first professional win in the Saddle Bronc Riding at the Teepee Creek Stampede. This weekend he all but assured himself of a spot on this year’s CFR roster with a huge 85.5 ride on Outlaw Buckers’ Bright Lights to take home the Finning Tour Finals win and the $4800 reward. The sizeable payoff vaulted the second generation Nanton, Alberta talent from 15th into the top ten in the standings.

Courtesy of the CPRA/Barb Poulsen