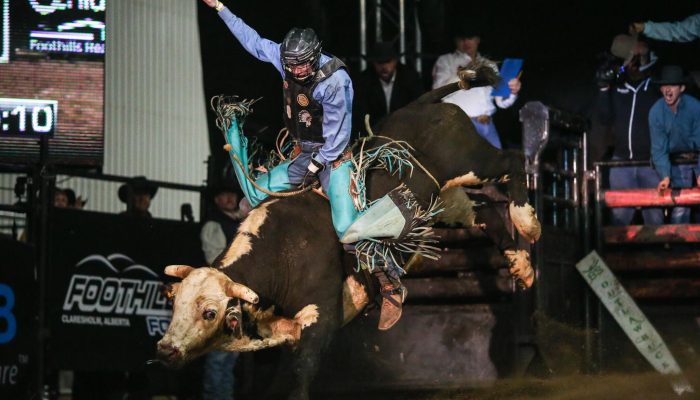 Courtesy of the CPRA

That’s the way bull rider Logan Biever described the moment to an appreciative sold-out hometown crowd moments after clinching the win at the 5th annual Chad Besplug Invitational. Biever had just turned in an impressive 88 point ride on Outlaw Buckers’ Home Grown to finish in a 2/3 split in the short-go and first overall with 171 points on two rides for a $3457 payday. It was the biggest win of the youthful Biever’s career to date.

“You can’t wish for anything better,” the 20 year old (he’ll turn 21 in March) acknowledged. “I knew the crowd was pretty much on my side and I was thinking this is one place you don’t want to fall off.”

And he didn’t. In fact, far from it as the likeable southern Alberta talent dominated two excellent bulls—another Outlaw Buckers product, Village Idiot for 83 points and second place in the long round before his roof-raising effort on Home Grown, the black white-face with CFR credentials for the winning ride.

Biever hadn’t seen Home Grown prior to their Saturday night encounter but that didn’t appear to be any kind of hindrance for the young 2018 PBR Finals qualifier.

“The bull came from Jay Nelson and I talked to Jay about him a couple of weeks ago; he said Home Grown was really good. I tried not to set any traps or plan something that probably wasn’t going to work. I just wanted to react to what he did and ride jump for jump and I guess it worked out.”

Biever will continue to ply his trade at both CPRA and PBR events and hope his hot hand will continue for a while yet. He’s ridden nine of his last ten bulls and the confidence that comes with that kind of success is clearly building.

“It’s never been better than it is right now,” Biever acknowledged. “It takes a long time to get that confidence to where you want it to be but I’ve been riding pretty good the last while. I just want to keep it going.”

Defending Claresholm Bull Riding champion, Garrett Green, topped the short round with an 89 on Vold Rodeo’s Desperado to finish second overall, just a point behind Biever in the (two head) aggregate.

Next up on the CPRA schedule is the Medicine Hat Broncs and Honky Tonks Spring Indoor Rodeo April 5-7.