But the eight time Canadian Finals Rodeo qualifier has never won the Canadian title. The Rocky Mountain House bronc rider took a step in the right direction in the opening round of the 43rdCFR with an 84 point ride on C5 Rodeo’s Rock Star.

“I wasn’t exactly craving that one,” Berry admitted with a grin. “I’d seen him before and he definitely wasn’t my pick out of that pen.”

The pen Berry was referring to was the eliminator pen (the toughest broncs of the week) and that group of horses took a toll on the best saddle bronc riders in Canada bucking off or disqualifying seven of the twelve finalists.

“That takes the pressure off for sure,” Berry said of his opening night performance, but the veteran bronc rider isn’t getting ahead of himself. “I’m not thinking at all about a championship—not yet. If you look after the basics, the big picture will look after itself.”

Berry has been known as one of the most consistent competitors throughout the years and 2016 was no exception. “I was pretty happy with my year,” he commented. “I know if I draw the right horses I can make pretty good rides. I like those bigger, stronger horses. I’m not as good at dressing up the nicer horses some of the other guys can because they are just so talented.”

“I was nervous,” Bouchard admitted after taking the go-round win with a 7.7 second run. “The funny thing is I’ve roped 91 calves at the CFR so I shouldn’t be nervous. I knew that calf and I knew he’d be a little off the pace so I took one swing more than I usually do because I knew he’d be good on the ground.”

Bouchard’s gritty  performance—he’s had to battle ligament damage in his roping and tying (right) hand over the last part of the year–earned him the $12 thousand plus first place cheque . The sixteen time CFR qualifier went to the head of the class with $35,642, $7400 better than regular season leader Logan Bird who earned $4424 on night number one with a 3/4 split.

As for the long Canadian drought in the tie down roping, Bouchard was philosophical. “There are lots of Canadian guys that rope good enough to win; it just hasn’t happened much lately. I mean I start every year thinking I’m going to be the Canadian champion but to tell you the truth I’d love to see my travelling partner win it.” That partner is Rimbey cowboy Dean Edge who is at his tenth CFR and picked up a fifth place cheque in the opening round of the CFR.

When Strathmore’s Scott Schiffner won his first Canadian bull riding title in 2001, Lonnie West was five years-old. Tonightthe twenty year-old 2015 Rookie of the year topped a field that included Schiffner as he put together an 87.5 point ride on Outlaw Buckers Bomb Shell. West, who hails from Cadogan, Alberta was a spectacular 87.5 for his effort, to edge two time and reigning champion, Dakota Buttar, who was just a half point back of West aboard C% Rodeo’s Neon Magic.

And there was drama in the barrel race tonight as Callahan Crossley from Hermiston, Oregon took top spot in the round with a time of 14.645 seconds despite having limited control of her horse for the last part of the run as the reins ended up on one side of her gelding, Brownie’s neck as she rounded the third barrel and headed for home.

Other first round winners included Ponoka’s Levi Simpson and Arrowwood cowboy, Jeremy Buhler who bested the field in the team roping with a 4.5 second run. The duo who have already made rodeo history by being the first all-Canadian team roping pair to qualify for the Wrangler National Finals Rodeo climbed to second place in the season standings just $6,000 in arrears of season leaders Brett Buss and Klay White, the first cousins, who split 3/4 in the round.

And the boys steer riding was split between Nanton’s Quentin Taylor and Youngstown’ cowboy, Dixon Tattrie who both posted 80 point rides.

For complete results go to www.rodeocanada.com 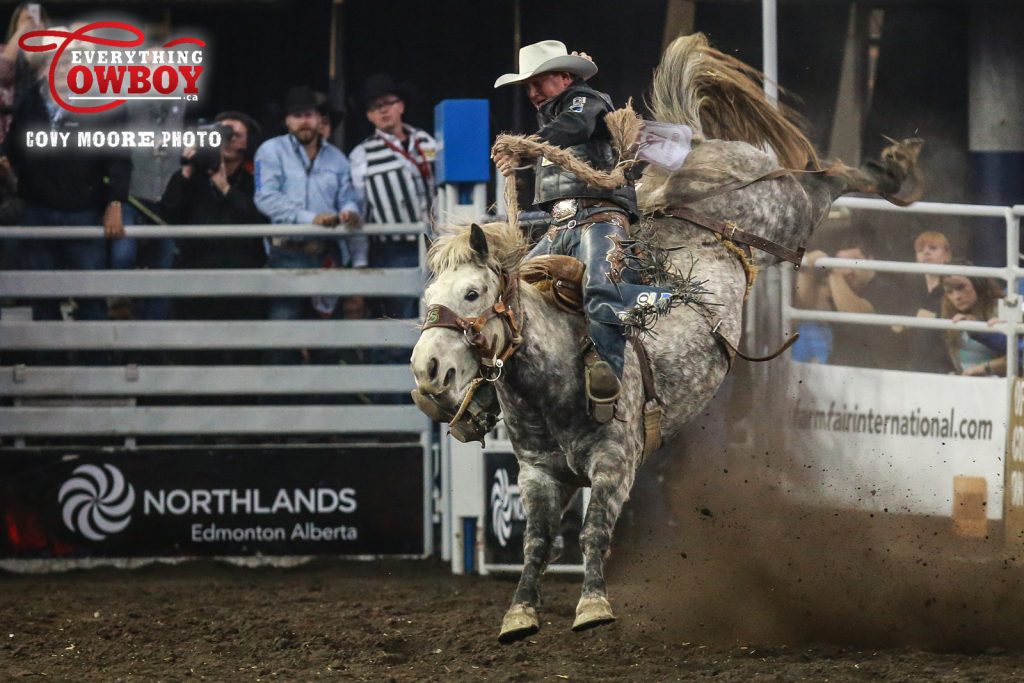