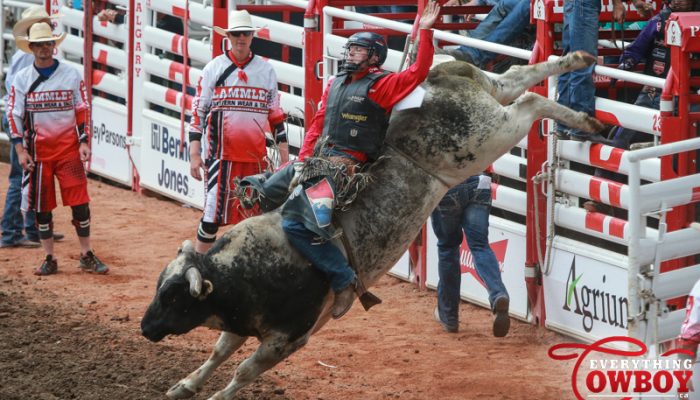 CALGARY, Alberta – The Stampede Rodeo started with a bang for some first-time competitors. The most excited among them was steer wrestler Craig Weisgerber of Ponoka, who claimed $5500 for the number one spot in the opening round at 4.7 seconds.

“Very first perf, first everything,” exclaimed Weisgerber, from Ponoka. “First round win, first…oh my gosh, I didn’t think this was going to happen!”

Despite his excitement, the competitor managed to remain calm and cool during his run.

“I just tried to do my job. (Hazer) Straws Milan pressed one nice for me, got a good head catch and everything worked out today. I didn’t think a 4.7 was going to get ‘er done but the way the conditions were, I guess it did. Anything can happen – it’s rodeo!”

Weisgerber got some practice with the big Calgary crowds by taking part in the Stampede Parade before competing in the afternoon.

“I had a great time at the Parade this morning. Man that was something else. The first time, you want to take it in. Why not ride your horse through downtown Calgary?  You don’t get to experience that every day.”

“They made me feel a hundred times better and it gave me that confidence rolling in here. I’m sore, but I feel good.”

Ivy Conrado led off the barrel racers Friday, and took her horse J-Lo around the pattern in 17.57 seconds. It held up as the fastest of the day, which was no small feat considering the horse’s experience with a muddy track.

“I’ve never ran J-Lo in the mud before today,” admitted the Colorado cowgirl, who won the $5500 for her effort. “I’ve actually never even loped a circle in the mud on her before today, so I wasn’t sure what to expect.”

Tie-down roper Jake Pratt of Texas collected $5500 for completing his tie in 8.9 seconds, fastest of the round, in just his second Calgary Stampede.

It’s the first time to Calgary for Brooks.

“It’s crazy. This place is awesome. The first time you walk in, it ranks right up there with going to the Finals, no doubt. This is a cool rodeo. I’m glad I finally got to come up here. Oh yeah, there were definitely nerves, but I don’t tell people that,” he chuckled.

Thurston on the other hand is a three-time Calgary Stampede champion.

They had the rider-friendly pen of bulls for the cowboys to play on in the opening round, and they showed their stuff. More than half of the bull riders made the whistle, with Jared Parsonage emerging with the high score of the day, an 86.5 on a bull called High Five, for his $5500.

“This is my third Calgary and my first bronze. It feels good to finally get one.”

The full list of results can be found here