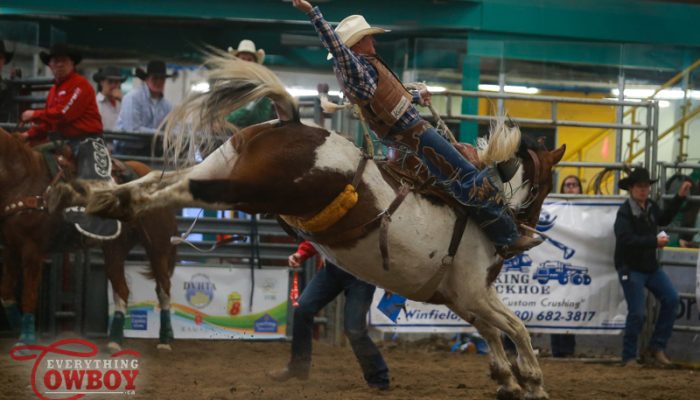 A ways to go

As of this evening, eight Canadians rank inside the top 15 in the PRCA World Standings.

Second best of all our Canadian contenders is Kolton Schmidt who’s only $7,000 out of first place in the heading. He’s up to $93,000 won on the year after throwing down a win at the Champions Challenge in Pueblo, the third place finish in Walla Walla, WA; forth in Armstrong, and second in a round in Ellensburg, WA.

Zeke Thurston is fourth in the world in the bronc riding but he’s a touch further behind number one man Jacob’s Crawley who’s run a muck on the standings this year. Thurston has over $94,000 on the year thanks to checks in Pueblo for $2,221; seventh in Armstrong for $811 and under $1,000 in Ellensburg for a sixth place finish overall.

Fellow bronc riders Clay Elliott and Jake Watson picked up a few checks over Labor Day Weekend. Elliott is seventh of all bronc riders having now passed the $71,000 mark after picking up $568 in Armstrong and $784 in Pueblo. Watson split the win with Layton Green in Merritt, BC for $892 and got that same $568 check in Armstrong. He’s 10th right now with $66,000 on the season, just over $3,000 ahead of the number 15 man. That 15th spot is important for Green as he’s about $4,000 behind, in 17th, despite earning third in Armstrong for $2,594 and that win in Merritt.

Levi Simpson and Jeremy Buhler are looking to become the first Canadian team of team ropers to qualify for the Wrangler NFR. Buhler is ninth of all heelers thanks to a second place finish at the Pueblo Champions Challenge with Dustin Bird, a tie for third in a round in Ellensburg and fourth in Walla Walla with Simpson. Simpson is 11th of all headers, about $4,500 ahead of the 15th spot.

Clayton Moore looked to be shut out on the weekend according to all the results. An off week pushed him down to 17th of all steer wrestlers, about $1,400 behind Trevor Knowles in 15th.

With only a couple weeks left of 2016, stay tuned to see how Team Canada fares on their road to Vegas.