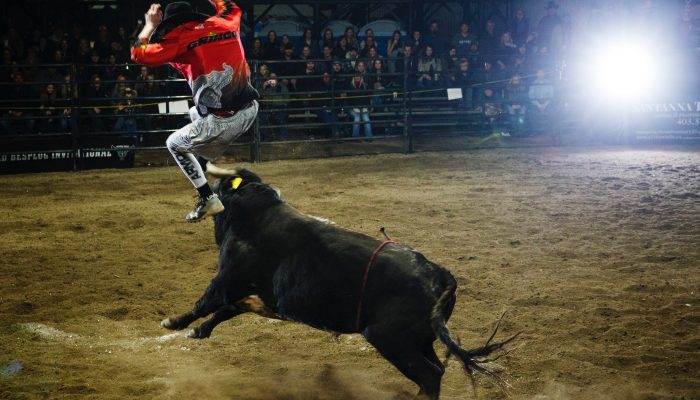 “What would rock and roll be without ambition, craziness, danger, and fun?” – Pete Wentz

I’m not sure if any truer words were ever spoken. The dust still hasn’t settled on the arena floor of Claresholm, Alberta. This past weekend the small town was home to the fifth annual Chad Besplug Invitational, the mother of Alpha Bull events. It did not disappoint. If you know Alpha Bull you needn’t be in attendance to know it was a show and a half, and if you haven’t had the Alpha Bull experience before buckle up and add it to your to-do list.

President and invitational namesake Chad Besplug continues to build the momentum of providing bull riding fans with a show they won’t soon forget. To summarize the culture of Alpha Bull; it replicates a rock concert.

This was my first Alpha Bull event and I had a blast. As a competitor and rodeo enthusiast; the big shows never disappoint, but Alpha Bull has a totally different vibe to it. The crowd is in a blackout except for the spotlight on the arena. You’re getting to watch some of the world’s best bull riders do their thing and when you should be standing up to refresh your beverage or hit up a food stand, they start the Bull Fighter’s Only competition. Basically you’re locked in your seats the entire night.

The light show, fiery grand entry and professional videography add to the rock n’ roll atmosphere creating an energy that is electric. Its energy like this that gives any competitor the motivation to lay out their best performance.

The fans aren’t the only ones who agree Alpha Bull stands unparalleled in experience.

“I love the lighting, it’s just you and your bull in a pitch black chute and you slide up and nod and boom the light hits you the music blares and the crowd goes wild,” says Garrett Green. The Alpha Bull set up obviously works for him, he’s won four of them. Green’s trophy case must takeover an entire wall because these boys aren’t getting buckles after their 90 point rides.

“After competing for years I have a box full of buckles in the basement. You can only wear one. I wanted to give something that would take up too much space to put in a box. Plus, its cool for pictures,” Besplug explains the concept behind the unique prizes.

“A person wins lots of buckles and other regular things so to get something unique always makes it special,” said Jared Parsonage, another event champion who digs the prizes.

Besplug’s ideal is bang on, the custom guitar and cow skull are one-of-a-kind and they make for a bad ass photo op at the end.

“I would have to say my favorite part would be how much the crowd gets involved,” Wrangler NFR qualifier Jordan Hansen reflects on the ones he’s entered; and won.

With Alpha Bull you’re getting the entire package, an amped up crowd, the best rodeo athletes in the country and a concert to boot. This weekend the after party in Besplug’s hometown was brought to you by Cody Hall and his band. They put on a great show combining down home red dirt vibes with an edgy, modern twist that compliments Alpha Bull culture perfectly.

For the bigger events Alpha Bull has been signing some big names for full concerts. In Dawson Creek this past December 2018 CCMA band of the year; Washboard Union, laid out a performance no one would soon forget. And the concert during the performance ain’t no small thing either. The Alpha Bull sound crew plays everything from current club tune remixes to old time classic rock.

It takes a village and 20 plus people make up the behind the scenes production and set up. Chad describes their team as being “thick as thieves.” The combination of technical skill and passion is a formula for success and the events go off without a hitch, engaging the crowd and maintaining that energy from start to finish.

“Take it to the limit one more time.” – The Eagles

What’s next for the unique bull riding production? Besplug’s lips are sealed but he said there are some big things in the works and of course they’re always on the hunt for another large scale show. On top of that they’re working on some new ideas with the popular Alpha Bull swag, and are currently involved in the process of making the clothing line 100% Canadian, an exciting concept for the brand.

If you haven’t had the chance to attend an Alpha Bull event, I highly suggest saddling up. Besplug and his kick ass team are making moves with their vision and the Alpha Bull stamp promises entertainment from start to finish.