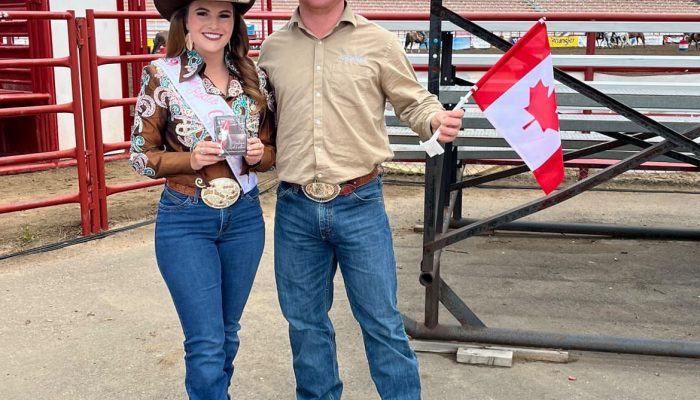 EDMONTON, Alberta (July 4, 2022) – I sat around a group of bareback riders and a few bronc riders Tuesday night following the performance at the Ponoka stampede. Some beers were drank, songs were sang, and stories were told. Danny Vandenameele strung a couple tunes and some of the best hits were sang, then the guitar was passed around to a few others. They sang about women, farriers, rodeo, heartbreak, and so on. Ty Taypotat told some old rodeo stories, where we all laughed and Pascal Isabelle sat there quiet as ever with a smile on his face. And me? Well I just sat there and got inspired. But I looked over at one of my favourite aussies and he seemed to be the happiest of them all. Strawbs Jones is one of those guys who can bring a group together and will always have a grin and a tale to tell. He also is the guy you want to have a beer with if you are looking for a cowboyin time.

But something about him inspired this here story because everything he had to say are things that will always bring joy to my mind. He looked around the group of guys and Strawbs with an untroubled look and had a few words to describe the little moment we were all enjoying.

“You know I haven’t sat around and listened to guys sing since 2019, this is real nice”.

Strawbs is off to the greatest show on earth in just two weeks time when pool B begins at the Calgary Stampede. Not only is he excited to be invited, he has one big goal in mind while he is there.

“I want to zipline into the arena over the crowd. That would be so cool”.

After seeing him light up when we talked about it, I sure hope I see him fly over that crowd on showdown Sunday.

I think one of his proudest moments to date is what happened most recently in the parking lot at the Ponoka stampede, alongside his fellow contestants and Miss Rodeo Canada. Strawbs has been in Canada competing for quite some time now but took an oath to officially become a Canadian citizen. Canada is now his stomping grounds and he is proud of it and we are proud to have him. MRC, Jayden Calvert, awarded him with a red and white feather from Montana Silversmiths to officially congratulate this exciting moment.

So to my new friend, Strawbs Jones, this one is for you buddy. Thank you for for inspiring this story for me and thanks for all the laughs. I look forward to seeing you down the rodeo trail.