Rodeo Houston Coming to a Close

Houston, TX: One more night remains until the $50,000 Rodeo Houston Bonuses are all paid out. Six Canadians have a shot at making their way to the top ten round tomorrow. They will compete for the finals two positions here tonight in the Wild Card Round. 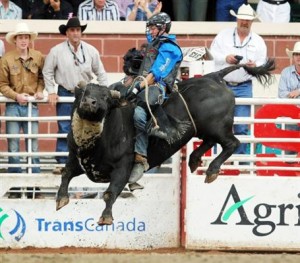 Ty Pozzobon of Merritt, B.C., can’t compete in Saturday’s championship round of the bull riding at the $2-million Houston Rodeo because the Professional Bull Riders association says he must attend its Ford Series event in Glendale, Ariz., the same night. Photograph by: Colleen De Neve, Calgary Heral

Tune into the live fee starting here in less than one hour.

For those of you who were also wondering about why Ty Pozzobon wasn’t competing last night in Houston, check out a story from Dawyne Erickson in the Calgary Herald about it here:

Check back here tonight for results and who else will be joining Lindsay Sears and Marty Becker for their shot at Houston’s $50,000 top prize.