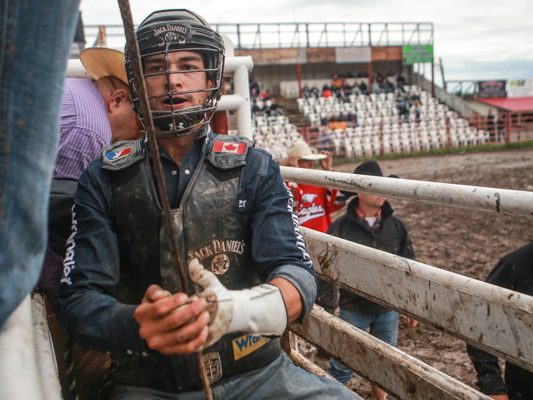 Night at the Ranch to support Ty Pozzobon Foundation

INNISFAIL, Alberta — When Ty Pozzobon won the inaugural Night at the Ranch bull riding at the Daines Ranch last year no one suspected that the young bull rider wouldn’t be back to defend his title in 2017.

The late PBR Canada champion posted an 88.5 on Blood Money to cap off the Night at the Ranch Foundation’s inaugural event last year – an event which raised $10,000 for the Canadian Sports Medicine Team and local charity.

Each bull rider in the event was riding to win some money for a local charity and Ty’s win meant that the Innisfail Eagles senior hockey team were the charity winners of the night.

Pozzobon’s victory left a lasting impact on the Eagles, who used the $5,000 from the win to build a new dressing room, which they named in his honour after his death in January due to complications from concussions.

“It just felt right this year,” said Kyle Daines, one of the organizers of the fundraiser, which is set to hit the dirt this Saturday at the Daines Ranch in Innisfail.

All the proceeds from this year’s event will go to the Ty Pozzobon Foundation, which supports the Canadian Sports Medicine Team’s efforts to be at every CPRA and PBR event.

In contrast to last year’s Night at the Ranch, which was held as a PBR event, this year’s event will be an open bull riding.

Guys like Scott Schiffner, Garrett Green, Brock Radford and Zane Lambert will be among the star-studded lineup of 32 bull riders in Innisfail on Saturday night.

Another unique change to the format of the Night at the Ranch will be a draft at the beginning of the evening that will see the cowboys pick which bull they want to ride in the long round.

“They’ll get to pick a bull that might fit them and their riding style a little better. It’s a fun event. We’re kind of trying to make it all for the bull riders.”

He noted that mental health awareness is becoming more and more important in the rodeo world.

“If you need help you’ve gotta say it. You can’t hide behind it anymore. These concussions – now we’re seeing what they do to you down the road. They’re not just short term injuries anymore or a knock to the head. Their lives change.”

The fun-filled evening kicks off with Mutton Bustin’ at 3 p.m. with the first chute cracking at 4 p.m. on Saturday May 13th, 2017 and a dance to follow. Admission to the Night at the Ranch fundraiser is by donation and everyone is welcome.