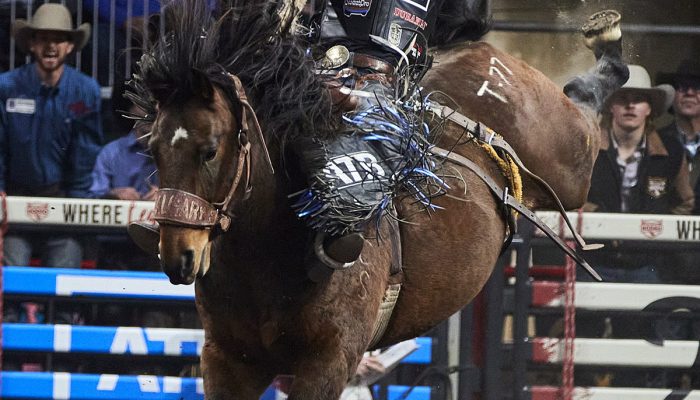 You can put that in the record books as the greatest bronc riding there’s ever been and I’ve seen a bunch of them.

That observation was made by retired eight-time Canadian Champion Rod Hay moments after the third go-round of the Canadian Finals Rodeo wrapped up in Red Deer Friday night. The bronc riding he was referring to saw a pair of 91.75 point rides that (unofficially) eclipsed the 44 year-old CFR record of 91 points set by Mel Coleman in 1978.

Two-time World and Canadian Champion, Zeke Thurston, the pride of Big Valley, Alberta, was first to reach that milestone as he matched up with the Calgary Stampede’s amazing Tokyo Bubbles. And moments later the last bronc rider of the night, Arrowwood, Alberta cowboy, Kole Ashbacher, equalled that mark aboard the award-winning OLS Tubs Get Smart from Macza Rodeo.

“That horse and I… our careers started at about the same time,” Thurston acknowledged moments after his ride. “I’ve been in a lot of four rounds and short rounds with Tokyo Bubbles and that’s the first time I’ve actually drawn her. I was looking forward to that one. I’ve been waiting for her.”

Ashbacher who was runner up for the Canadian title a year ago was one of the last riders to get on Get Smart as the 20-year-old gelding will be retired after this year’s National Finals Rodeo in Las Vegas. He’s the Canadian Horse of the Year and runner-up for the world title and he’s a little scary.” the long, tall 26-year-old admitted. “You get a little nervous when they run him under you (in the chute).”

Nervous or not, Ashbacher was flawless as he matched the much-decorated bay jump for jump. Ashbacher has gone to the lead in the bronc riding with Thurston in second place just $3100 back but the roles are reversed in the all-important—and very lucrative–aggregate with Thurston clinging to a slender one-and-a-half-point lead over the his main adversary. Former Canadian Champion Layton Green collected a third-place cheque with an 89 score; Ben Anderson followed up his second go-round win with a fourth-place 88.5, and Dawson Dahm was 88.25 to catch a fifth-place cheque. Incredibly Rod Hay’s son, Logan, was out of the money despite an 87.75-point effort.

The large Centrium crowd erupted as the twin winning scores were announced. Fans will get another opportunity to see this pen of saddle bronc horses during Sunday’s final performance of CFR ’48.

The Wainwright, Alberta team roping brothers, Dawson and Dillon Graham, who dominated Canadian Pro Rodeo all season continue to shine at the 2022 CFR. The talented duo clocked a speedy 4.3 second run – the fastest of CFR so far in round three. When added to a pair of earlier second place finishes, the brothers have $23,220 in CFR earnings and continue to enjoy the overall lead and first place in the aggregate.

In the ladies barrel racing, it was Texan turned Albertan Shelby Spielman and her Horse of the Year, Hot Donna, who took the honours in the third round. The Ponoka duo clocked 13.88 seconds to win the $9335 top cheque. Season leader, Bayleigh Choate continues to lead the overall standings at the halfway point in a Finals that has seen only two of the twelve competitors run penalty free over the first three performances.

Cochrane cowboy Tanner Milan continues to be the model of consistency in the steer wrestling event. The two-time Canadian champion recorded his second go-round win Friday evening with a 3.9 second run. When added to his earlier placings, the veteran has over $20,000 in CFR earnings and has moved solidly into contention for a possible third title.

Granum, Alberta’s Wyatt Hayes earned the tie-down roping buckle in round three with an 8.0 second run. The win also catapulted Hayes to the lead in the All-Around race.

2016 Canadian Bull Riding Champion Jordan Hansen turned in a dazzling 89.75 point ride on Vold Rodeo’s 24 Out Of The Blue for the go-round win. With two out of three bulls covered, Hansen moves to first in the aggregate – just four-and-a-half points up on overall leader Jared Parsonage, who bucked off Friday night but still holds a commanding lead.

Round four of CFR ’48 gets underway at 12:00 noon Saturday afternoon, followed by a second performance at 6 pm – Peavey Mart Centrium, Westerner Park in Red Deer.

The Canadian Professional Rodeo Association(CPRA) with headquarters in Airdrie, Alberta is the official sanctioning body for Professional Rodeo in Canada. The CPRA approves 55 events annually with a total payout exceeding $5.7 million. The organization oversees the SMS Equipment Pro Tour Finals each fall in Armstrong, BC, holds their premiere event – the Canadian Finals Rodeo (CFR) – at Westerner Park in Red Deer, AB November 2-6 and endorses the Maple Leaf Circuit Finals as part of Canadian Western Agribition in Regina, SK. Follow the CPRA on Twitter and Instagram @prorodeocanadaofficial, ‘Like’ Canadian Professional Rodeo Association on Facebook or online atRodeoCanada.com.