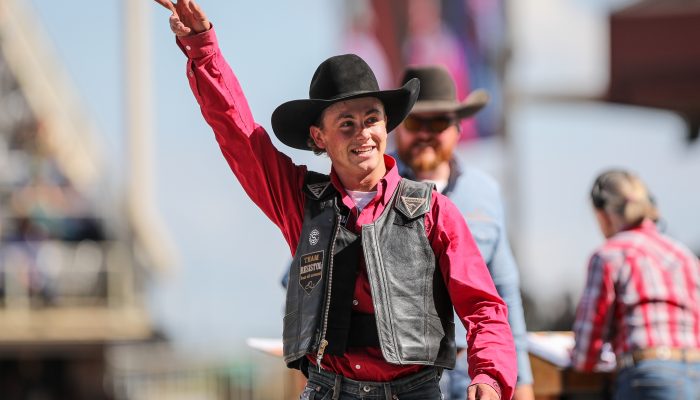 EDMONTON, Alberta — It has been an incredible season for the cowboys in Canada and it keeps getting more exciting. With the Wrangler NFR nearing months away, it is now crunch time and these men are hungry for a chance in Vegas.

Right now, we see seven Canadians inside the Top 15 in the PRCA Pro Rodeo World Standings.

Currently, six saddle bronc riders are inside the top 15 in the world standings which means these last few months of rodeo are where it all counts.

By no surprise, Logan Hay is above the rest of the guys in the number six spot. I say there is no surprise after a big win in Pollockville and a 95.5-point ride to break the world record. Hay has currently $120,711.29 won and continues to win money at every rodeo he competes at. His most recent win being at the Chase Hawks Rough Stock Rodeo in Billings, Montana. He was aboard one of the most prestigious bucking horses, Wild Cherry, from the Calgary Stampede, where he marked 87 points and won $8,490. Not to forget and mention, Hay also won the Calgary Stampede and joined his father Rod and uncle Denny as another Hay to take home the championship. It couldn’t get much better for Hay and after being a couple hundred dollars out from the WNFR last year, he has proven why he deserves to be there this year for the first time.

Not far behind Logan is three-time Calgary Stampede Champion and two-time World Champion, Zeke Thurston, in the number eight spot with $114,413.35 won. Some of these earnings come from the Sundre Pro Rodeo, Cody Wyoming, and most recently the Dawson Creek Stampede and a fourth-place finish in Hermiston, Oregon. Thurston is a bronc rider who defines consistency and rarely makes a mistake. These earnings are only bound to increase after a busy couple of months and 20 straight days down south.

After a big win Ponoka, it is Layton Green, who is sitting directly behind Thurston in the ninth spot with $106,113.10 won. Layton also made big wins at Strathmore, the Wildwood Bronc Bustin, the High Desert Stampede, Kananaskis Pro Rodeo and the Cinch World’s Toughest Rodeo. If all goes well, this will be Green’s third WNFR qualification.

In the 11th spot in the bronc riding is Kolby Wanchuk with $96,409.62 won. Following closely behind is Kole Ashbacher in the 13th spot with $83,843.28 won. Currently on the bubble are former WNFR qualifiers Ben Andersen and Dawson Hay. Andersen has had an incredible season and has jumped ten spots within the last month with now $71,378.92 won, placing him in the 17th spot. This puts Anderson $6513.59 behind the guy in the 15th spot, Damian Brennan. Dawson Hay currently sits in the 21st spot with $63,346.18 won. After battling an injury for most of the season, Dawson seems to be riding and feeling better and will move his way up the standings again.

In the steer wrestling there are two cowboys working hard to make their appearance at the WNFR. One of the cowboys we have watched compete there before, Curtis Cassidy. Cassidy is currently sitting 27th in the world with $46,007.25 won. The other tough bull dogger is Stephen Culling. After a big win in Ponoka, Culling climbed his way to the 23rd spot and has earned himself $48,892.15 this season. Right now these two need to make it count as the guy in the 15th spot has won $57,575.99.

Moving on to the tie-down roping it is Beau Cooper and Kyle Lucas within the top 40. Lucas is in the 32nd spot with $46,625.48 won. Some of these earnings come from a big win at the National Western Stock Show and Rodeo. Cooper sits 8 spots below him in the 37th spot, with $40,468.62 won. This Stettler cowboy had some success by winning the Bruce Stampede and the Medicine Hat Stampede. It was a big weekend for Cooper. It is an extremely tight race between all the cowboys in the tie-down roping but these guys have some catching up to do. Right now Cooper Martin is sitting in the 15th spot with $79,146.90 won. A few large cheques would get Lucas and Cooper out of the bubble.

Again on the timed event end, we have seen Jeremy Buhler have another great season as a heeler in the team roping. With $95,680.28 won, Buhler is 5th in the world standings. A huge win at the Ponoka stampede, Rodeo Salinas, Last Chance Stampede in Helena, and Sisters Rodeo has given him the advantage above the rest of the team-ropers.

In the breakaway roping, one of the toughest cowgirls sees herself in the fifth spot of the WPRA standings. She may have a Texan address now, but Shelby Boisjoli is our Canadian girl. Boisjoli has won $52,677.66 this season so far.

Finally, in the bull riding we see the number one ranked bull rider in Canada sitting on the bubble for the world standings. Jared Parsonage is 13th in the PRCA standings with $77,899.16 won. Parsonage has been placing at many of these tour rodeos throughout Canada, one of them being the Wainwright Stampede. Just a few days ago Jared was on the bubble in the 16th spot but has put himself now in the top 15. In the 22nd spot is his travelling partner, Jordan Hansen, with $61,494  in total earnings. Hansen is rapidly climbing the standings and is hungry for his spot at the WNFR.

The Cadwell Night Rodeo is underway where we expect to see these guys win some money at. There are also big rodeos in Canada like Lethbridge, Armstrong, and Langley, where there are chances to take home a large check.