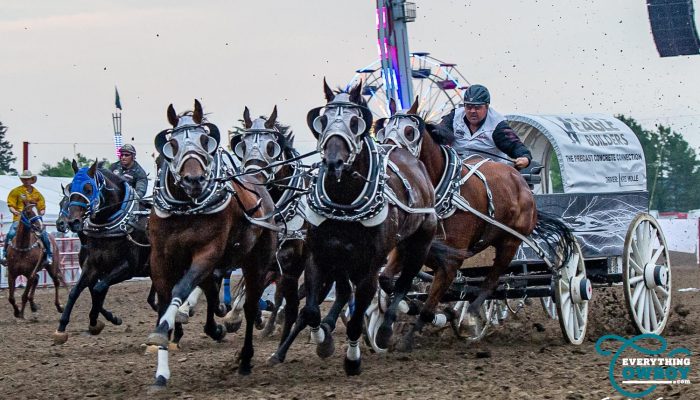 Last Round Before “Semi-Final Saturday” at the Ponoka Stampede Chuckwagon Races!

Ponoka, Alberta- There was a lot on the line Saturday night at the Ponoka Stampede, as it was the last chance for drivers to try to get into the top eight overall and qualify for “Semi-Final Saturday” and ultimately a spot in Sunday’s $50,000.00 Tommy Dorchester Sudden Death Championship final heat.

When the night was complete, it was Obrey Motowylo and his Co-operators Outfit, and along with outriders Hayden Motowylo and Ethan Motowylo, who topped the overall aggregate with a four-run total of 5:15.55 and will drive off in a new 2022 GMC Truck as the Aggregate Winner at the 2022 Ponoka Stampede. He will be joined in the semi-final round by Jordie Fike, Troy Flad, Ross Knight, Mitch Sutherland, Codey McCurrach, Rae Croteau Jr. and Chanse Vigen.  Kirk Sutherland ended up in the crying hole, 9th place overall, and just missed the semi-final round by just 17 one-hundreds of a second. Kurt Bensmiller who was leading the aggregate standings at the start of the day, took himself out of the competition after missing a barrel and incurring a 10 second penalty.

The top 4 times from the two semi-final heats on “Semi-Final Saturday” will qualify into the $50,000.00 Tommy Dorchester Sudden Death Championship final on Monday where the winner will take home the 2022 Ponoka Stampede Championship.

As far as day results are concerned, it was Kris Molle who cashed the top cheque with his Eagle Builders outfit after posting the fastest time of the night with a 1:16.71. Mark Sutherland placed second on the night; Layne MacGillivray was third, with Ross Knight and Darcy Flad rounding out the top five on the night.