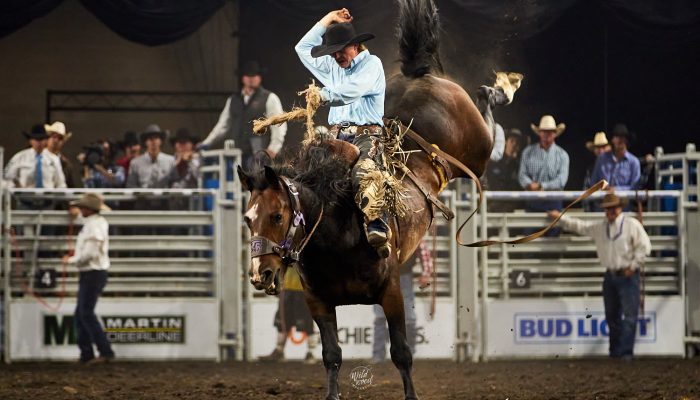 EDMONTON, Alberta (September 25th, 2022) – After an incredibly thrilling season, we have reached the end. A few contestants made their mark during the Canadian Pro Rodeo season and have accomplished the goal all of them have had in their sights on since first starting to compete. Many cowboys will be heading into the Canadian Finals Rodeo (CFR) Hunter Sawley, who never made it in the Novice Saddle Bronc Riding as a youth, will finally be making his debut competing in the Saddle Bronc Riding at his very first CFR in less than two months.

Sawley said that he is ecstatic to be headed to his first CFR and is “excited to spend a week in Red Deer for the first time”. Sawley has always been a solid rider and has remained consistent, however everything came together for him early in the season after he won some money placing second at the Lea Park Rodeo and continued to pull a cheque or two every weekend following. Interestingly enough, Sadly mention he fed off the energy from some of the guys in other roughstock events and that was what gave him even more confidence in the arena.

“I honestly started to feed off bull riders’ energy and win with them,” said Sawley. “When they win and then I win. I would talk about it with them and feed off their energy and confidence”.

He also made note that bull riders such as Tanner Eno and Micheal Ostashek would collectively celebrate his success with him if they all did well in their respective events.

After watching the CFR last year, Sawley wanted to make it his goal to make it to the finals in 2022. While he mentioned part of him put it on the back burner because he was supposed to go guiding in the Yukon, however after doing well a close friend advised him to keep rodeoing and it evidently was a great decision. With bronc riding being one of the most competitive events in Canada requiring athletes to go head to head with some of the top athletes in the world, Sawley explained this drove him and motivated him even more.

“The big one that motivated me the most was Medicine Hat. When I won Medicine Hat, I just kinda went holy shit, I got this; I just beat the best of the best in the world and you know you can do it. From then on I knew I could show up and start winning go rounds”.

Sawley has a goal to win the first round of the CFR and have fun and then just “roll with it” for the rest of the week. Unofficially, Sawley will be heading into the finals in the eighth spot with $21,495.99 won after attending 43 rodeos.