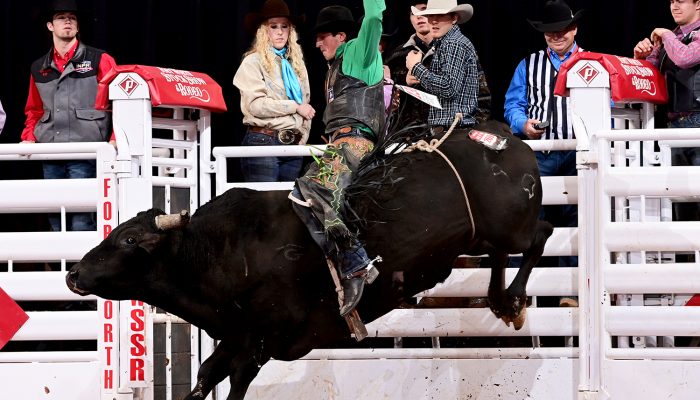 Gilmore earns $4,400 at Fort Worth Rodeo as only successful bull rider

Jack Gilmore earned $4,400 and a semifinals berth at the Fort Worth Stock Show & Rodeo’s ProRodeo Tournament as the only successful bull rider on Sunday. He scored 89.5 points on Rafter G Rodeo’s bull Megalomanic to win round 1 of Bracket 2. FWSSR photo by James Phifer

FORT WORTH, Texas (Jan. 22, 2023) Jack Gilmore of Ironton, Missouri, was the biggest winner on Sunday at the $1.2 million Fort Worth Stock Show & Rodeo (FWSSR) ProRodeo Tournament.

As the only bull rider to earn a score, Gilmore took home the entire $4,400 pot in round one of Bracket 2 for his 89.5-point ride on Rafter G Rodeo’s bull Megalomanic.

The 20-year-old bull rider finished sixth in the rookie standings in his event last year and has a good start early in the 2023 season as he’s currently ranked fourth in the world championship standings of the Professional Rodeo Cowboys Association (PRCA).

Contestants in each bracket compete in two rounds of back-to-back action. The top two money earners per bracket in each event advance to one of two semi-finals so Gilmore is on his way as there is only another $4,400 to be won in bull riding on Monday night in round two.

Gilmore is enjoying life, living by a Confucius saying later paraphrased by another Missourian – Mark Twain –“Find a job you enjoy doing, and you will never have to work a day in your life.”

JJ Hampton of Stephenville, the 17-time world champion cowgirl, won round one in breakaway roping with a time of 2.0 seconds. Hampton and other veteran cowgirls blazed the trail for the women who are now roping for equal prize money at some of the biggest rodeos in the country. The FWSSR ProRodeo Tournament was the first major PRCA rodeo to offer equal prize money for breakaway roping when the rodeo moved to Dickies Arena in 2020. A big contingent of Hampton’s fans was in Dickies Arena on Sunday to cheer her on.

The same roster of athletes will compete Monday night in round two. The third-highest money winner of the bracket will advance to the wild card round while those finishing lower than third go to the non-qualifier pool. The highest remaining money earner in each event in the non-qualifier pool after all brackets are completed advances to the wild card round.

Round two of Bracket 2 begins at 7:30 p.m. Monday at Dickies Arena.

FORT WORTH, Texas — The following are unofficial results from the Fort Worth Stock Show & Rodeo’s Pro Rodeo Tournament, January 22, 2023.