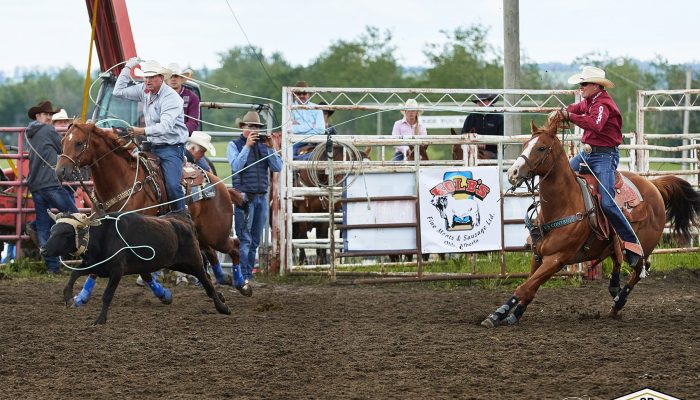 Davison and Schmidt Among Weekend Stand-Outs

Several competitors made the most of a busy CPRA week to put together serious moves in the all-important Canadian standings. Among the biggest shakers and movers were…

–Grande Prairie barrel racer, Jennifer Neudorf, who was in 12thplace in the standings coming into the weekend, and was on top of her game once again as her 15.27 second run at Stavely earned her a first-place cheque of $2180. She added a second place finish and $2748 at Innisfail for a big-time $4928 total payoff that will guarantee a big move up in the standings.

–Steer wrestler, Brock Butterfield who also had a productive weekend as he won Innisfail with a 4.5 second run for $1924, then added a second-place finish and another $1767 at Stavely to collect a total of $3691. The weekend’s successes have jumped Butterfield into contention for a CFR qualifying spot.

—Tie-down roper Ty Harris – who has made his return to Canadian Pro Rodeo competition known with his third win over two weekends. The San Angelo, TX hand – who qualified for his first CFR in 2019 – earned top cheques at Rocky Mountain House and Brooks last week then added to his bank account further with the win at Innisfail (8.4 secs, $2351).

–A couple of saddle bronc riders who enjoyed big paydays this week. 2017 Canadian Champion, Layton Green, finished second in each of the two long gos at the Wildwood Bronc Bustin, then split the short round with Jake Watson, courtesy of a 92-point effort on Calgary Stampede’s Yesterday’s Delivery. The result was a $4852 payday; when added to a $361 cheque out of Innisfail, the Meeting Creek, AB talent topped the $5000 mark in earnings. High River, AB cowboy Lucas Macza had a $5000 week of his own, winning the first ever Gleichen, AB Gunner’s Bronc Battle with an 87.5 score on Big Stone Rodeo’s Gone Fishin to pocket $3169. He followed that victory with an 89 on C5 Rodeo’s Stargazer for $2026 and a smooth $5194 in total.

And Novice Saddle Bronc rider, Jaret Cooper was also a double-winner, capturing top honours at Gleichen (75 points, $496) and Innisfail (74 points, $364). The season leader from Vernon, BC added a 4thplace cheque of $155 at Wildwood, providing a $1015 injection into his season earnings.