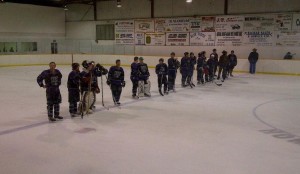 The 2012 edition of the Horseshoe Cup is in the books, and to say it was your typical offensive minded charity matchup is far from close. The cup, which is an annual fundraiser for the Cowboy Benevolent Fund, proved to be everything we thought it would be. Any charity hockey game I’ve witnessed before shows two teams laughing, friendly stick work, no backcheck, and everyone coming together for a cause. Now all the cowboys and cowgirls were in Big Valley for the cause, but the games were far from friendly and the fans loved every minute of it. The evening started off with the CPRA cowgirls vs the WPCA Wagon girls. This was the first time the girls faced off to start the evenings events, and after Friday it won’t be the last. It was apparent after only 10 minutes that this game wasn’t a bunch of girls drifting around the ice looking for goals. The cowgirls offense was alot for the wagongirls to overcome and the game was one sided as far as scoring. Taking a lead into the 3rd, the Cowgirls kept throwing everything the had at goalie Gina Berreth. The emotions finally overcame alot of the girls, with a big 3rd period scrum that seen the first near fight of the evening. However, when the final buzzer sounded it was the CPRA cowgirls who remained on top 8-2, and provided probably the most entertaining game of the night!

Next on the schedule, the 5th Annual Horseshoe Cup. With the CPRA and WPCA teams each hoisting the cup twice, it marked the matchup of who would prevail with number three. Just under 200 fans came through the gate, and all were treated to another great game. The teams were made up of many different talents, including some ex WHL players, Jr.A, and guys who have only battled it out in the beer league ranks. The game started out fast and physical, as both teams got right to throwing the body early. It was quick to see that nobody wanted to lose this one, and charity or not it was on. The Cowboy’s were quick to strike, and took an early 2-0 lead with goals by Colter Harden and Steve Theissen. The WPCA would get one past goalie Todd Gallais to make it 2-1, and that’s how the period scoring would go. Bullfighter Darryl Thiessen would take on the tough guy role for the Cowboys, dropping the gloves in the 1st and only fight of the game. Devon Mezei took to the net for the CPRA in the 2nd, and would also give up one goal, with the cowboys leading 4-2 going into the final frame. Everything Cowboy’s Ted Stovin would enter the net on the three goalie rotation in the third, and with Eddie Melville leading the offense, the WPCA would tie the game up at 4-4 after sixty minutes. The teams opted for a shoot-out to determine the winner, and would go with 5 shooters. CPRA’s JD Hayes was the first to shoot and was the only goal scorer as Ted Stovin stopped all 5 shots he faced and ultimately gave the CPRA a 5-4 win and the 2012 Horseshoe Cup title.

Off the ice, there was just under $5000.00 raised for the Cowboy Benevolent Fund. A fund assisting injured cowboys and cowgirls in rodeo and on the race track. It was an evening that brought two different groups together for a great cause, and regardless of the results teams were quick to meet for a celebratory beverage at the end of the night. Everyone played with tons of pride and passion for their respective organizations, and together put on a great hockey matchup and raised alot of money. It was a privledge to play with a great group of guys, and thanks to all our sponsors and volunteers for making the event possible. See you next year, for the 6th Annual Horseshoe Cup!