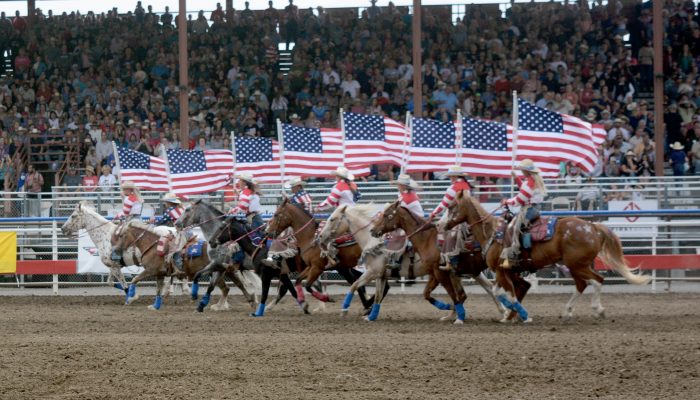 Contestants find their way to Cody over July holiday

CODY, Wyo. (June 28, 2022) — Rodeos and the Fourth of July Holiday just seem to go together for anyone who loves Western sports.

With the amount of Professional Rodeo Cowboys Association and Women’s Professional Rodeo Association competitions held surrounding Independence Day, it has long been known as Cowboy Christmas for the competitors. Travels that take them nearly coast to coast and scheduling that would make a rock star cringe become the norm for the adrenalin-fueled rodeo athlete.

A large majority of those contestants will make a stop at the Cody Rodeo Grounds to try to get a share of over $300,000 in prize money available at the Cody Stampede. Action kicks off with the Cody Yellowstone Xtreme Bulls and Bullfighters Only on June 30 beginning at 6:30 p.m. A year ago, Chance Schott from McLaughlin, South Dakota won the bull riding and will be back to defend his title. After the competition, which includes the very popular Bull Fighters Only, fans can enjoy the Xtreme After Party with live entertainment right on the grounds.

Full rodeo action starts July 1 with three performances beginning at 8 p.m. The final performance of the Cody Stampede is on July 4 at 5 p.m. with plenty of time to get ready for fireworks. The total payoff at the 103rdcelebration is expected to exceed $300,000. A year ago, 10 champions were crowned at the rodeo and nine of them went on to qualify for rodeo’s ultimate championship the Wrangler National Finals Rodeo (NFR).

Clay Tryan, of Billings, Montana, grew up coming to the Cody Nite Rodeo and helped hone his world championship skills here. When he finally got the win at the Stampede last year, it brought back a lot of memories. He won the title with Jake Long, but this year will be roping with Jade Corkill, a partner that he won his third gold buckle with in 2014.

In addition to the rodeo, the Cody Stampede celebration will include two parades, and the Wild West Arts Fest. As soon as the 103rd Cody Stampede comes to a close, the Cody Nite Rodeo will start back up giving the future stars of rodeo their opportunity to shine. More information is available on the website www.codystampederodeo.com.