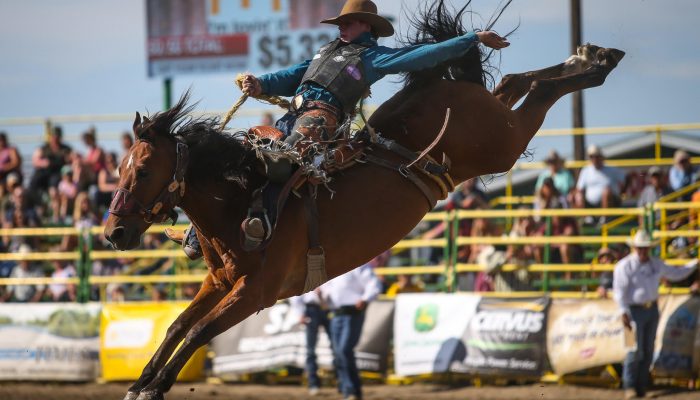 Dawson Hay’s ride on Get Smart was as electric as the Strathmore Stampede fans anticipated it would be.

“He was awesome,” the third generation bronc rider grinned after his Strathmore Stampede match-up with Northcott-Macza’s four time Canadian Saddle Bronc of the Year. “Since I got hurt at Medicine Hat, I’ve loosened off my saddle and stirrups a little because it doesn’t hurt as much to ride. But I wasn’t sure how it would go today. I just didn’t want to stub a toe.”

Far from it—as the second year pro and the four-legged icon combined for 90.75 points for the win and a whopping $6226 payday. Combined with a second place finish at Regina’s inaugural Pile O’ Bones Rodeo, also part of the Finning Pro Tour, on Franklin Rodeo’s, Dark Secret for a second place 86 points and $2900, the Wildwood, AB hand gathered up a total of $9126.56 this weekend alone.

An earlier stop at Sentinel Butte, North Dakota for the Home on the Range Champions Ride saw Hay finish second in both go-rounds and the average for a tidy $7700 payday. The past week’s success will consolidate his hold on a top three spot in the Canadian standings and will see him move up at least a couple of notches from the 10th place spot he occupied in the world standings heading into the weekend as he vies for a first trip to the Wrangler National Finals Rodeo in Las Vegas.

“It really takes the pressure off to have this much won at this point in the season. Some guys have to go to just about everything to try to make the CFR or the NFR but I can take some time off to heal up a bit.”

The injury Hay alluded to occurred at the Medicine Hat Stampede the previous week as he was climbing down into the bucking chute for a much anticipated matchup with the outstanding Kesler bronc, Gone Country. The mare lurched back and slammed the talented 21 year old into the back of the chute. It was quickly evident that Hay was in pain and he asked for a little time to recover. Minutes later, he climbed back into his saddle, nodded and persevered for an 87 point ride, good for second place and $1900.

“It was pretty much an adrenalin ride, I think,” Hay admitted after the dust had settled.

The injuries, however, were severe enough to force Hay to turn out of the short round the next day at Cheyenne. All of which made this weekend that much more remarkable.

Texas team roper, Hunter Koch, celebrated his 22nd birthday in July. His heading partner, two time world champion, Matt Sherwood, will turn 50 before the end of the 2019 rodeo season. The unlikely pair were on their game this weekend as they continued their quest for berths at both the CFR and WNFR.

The duo posted a 4.4 second run at Regina (second only to Steele Depaoli and Trent Tunke’s 4.3) for a $2388 per man payout. They then added a 5.5 second run at Strathmore to collect another $2800 to provide a nice boost to their WNFR chances while moving them solidly into the top ten in Canada and closer to clinching a CFR berth, something both men established as an objective early in the season.

“It was a goal of ours right from the start,” Koch admitted, “and not a maybe goal—it was something we really wanted to get done. I came up here in May, about a month sooner than most guys come north because getting to the CFR is just that important to me.”

As for their initially getting together, Koch grinned. “I wanted to go to Tucson and my partner (we live in Texas) didn’t want to go. It tuned out Matt, who’s from Arizona, wanted to rope at Tucson as well and didn’t have a partner. It was Canadian, Kolton Schmidt, who actually got us together. We did pretty good at Tucson and at a couple of jackpots so we kind of talked about it and decided to partner up and go for it.

“It’s been awesome roping with Matt,” Koch noted. ”He’s taught me so much about the business side of rodeo, stuff I didn’t know and didn’t really even think about. Plus we have pretty much the same mindset. We stay as positive as we can. We didn’t have a good July but we knew we’d come out of the slump if we just kept our chins down and stayed positive.”

2016 Canadian Champion bull rider, Jordan Hansen had a big-time weekend as well as he split the win at Regina with an 86 point effort on C5 Rodeo’s Moo Cha Cha for $3335, added a 4/5 split at Strathmore – 87.25 points for $2803, and was the only man to stay on at Heber City, Utah to cash a $12,956 cheque. The triple feature solidified Hansen’s grip on top spot in the Canadian standings and moved him very much into the conversation for a reprise of his 2017 WNFR qualification.

Morgan Grant, the Ontario born and raised tie down roper and steer wrestler, was another guy making a big move on the weekend. The three time High Point Champion, put together two swift runs—a 7.8 for second ($5661) at Strathmore and a 7.6 to split 3/4 ($2842) at Regina. The $8503 weekend boost will vault him from 12th to somewhere near the top of the roping standings in Canada.

Meanwhile Gleichen, AB barrel racer Rylee Wilson picked up the first pro win of her career with a 17.990.

Next up on the CPRA schedule are: La Crete Field of Dreams Stampede, Aug 6-7, Jasper Heritage Rodeo, Aug 7-10 and Finning Pro Tour stop, the Dawson Creek Exhibition and Stampede, Aug 9-11.