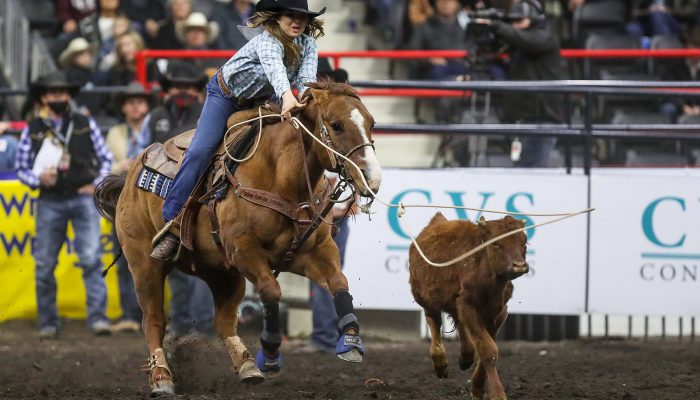 The Canadian Professional Rodeo Association is pleased to announce that this year’s Canadian Finals Rodeo, CFR 48, will transition the Breakaway Roping roster from six to twelve qualifiers.

“These cowgirls are immensely talented ropers and horsewomen,” comments Denny Phipps, CPRA Assistant General Manager. “And the CPRA is proud to be increasing the CFR contestant roster in the Breakaway Roping as these athletes vie for a Canadian championship on the biggest stage in Canadian Pro Rodeo. The level of competition has been amazing to watch all year and I believe that fans in Red Deer are in for an exciting show!”

The event is open to female rodeo athletes of all ages – as long as they hold a current CPRA membership.

Flewelling, from Lacombe, Alberta, notes, “I think the move to take 12 girls instead of 6 to the Finals is a huge step in the right direction. There are a lot of very good breakaway ropers in Canada. I’m glad that the CPRA has noticed and acknowledged the support and growth the breakaway (event) has seen this year. I know the breakaway ropers are very thankful for the decision. These girls have been waiting for their chance to go to the rodeos, and now that it’s finally here they’re showing up in full force.”

And Lakota Bird, who is part of the Bird rodeo family from Nanton adds, “I think the success of breakaway roping can be attributed to the professionalism the ladies have shown! There have been upwards of 60 entries at many of the rodeos. The times and competition have been tough; breakaway ropers are showing that they belong in professional rodeo. The crowd loves the fast pace and the addition of another women’s event!”

Bird goes on to say, “Having 12 qualifiers to the finals will give contestants incentive to continuing rodeoing late into the summer. The roping has been tough this year and I think there are going to be 12 girls who deserve to be at the Canadian Finals. We are grateful to the CPRA for allowing us to compete on Canada’s largest rodeo stage and to the committees who have included us in their rodeos to get there!”

Breakaway ropers will be competing in the final three performances; however as this event is outside of the current CFR agreement, the prize money will be raised by the breakaway ropers.