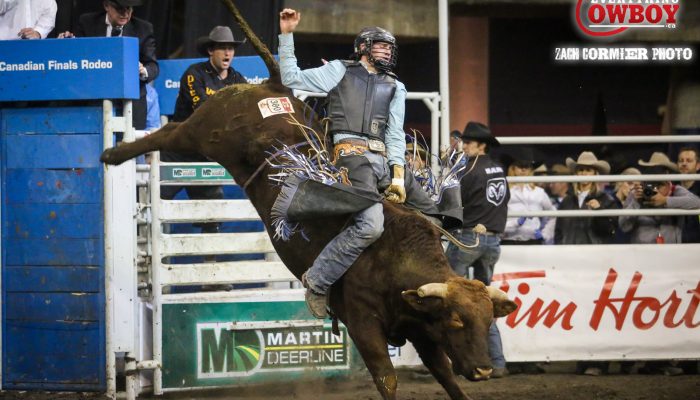 EDMONTON, Alberta — With less than a month left of the PRCA season, the Canadian cowboys and cowgirls are making each and every ride or run count more than ever. Viewers have had their money on quite a few consistent contestants fighting for their chance at the Wrangler National Finals Rodeo (WNFR). Some of these contestants are sitting outside the bubble, so the pressure is on more than ever. Some of these contestants are also well on their way to the Thomas and Mack and are riding their best to make it happen. There are currently ten contestants sitting within the top 15 of their respected events, with one cowboy sitting on the bubble.

In the bareback riding there is one Canadian that has a strong chance of making his eighth WNFR if he continues to make money at these last few rodeos. Orin Larsen sits in the 14th spot of the world standings with $91,858.28 won. In order for Larsen to stay safe he needs to keep up the consistency and place at these upcoming rodeos. A fourth-place finish earning him $1211 at the Ellensburg Rodeo has given Larsen some money to keep him within the top 15. Although, he is only around $1200 ahead of Wyatt Denny who sits in the 16th spot, so he needs to remain consistent.

Meanwhile in the saddle bronc riding it is the same guys we have watched ride incredibly strong for the entire season. Two-time NFR champion and seven-time NFR qualifier, Zeke Thurston, leads the way of the Canadians wanting to compete in Las Vegas. With $138,510.04 won, this puts Thurston in the fifth spot of the world standings. Following not far behind him is Logan Hay, sitting in seventh place with $129,169.37 won. As stated in our last world standings update, this will be Logan Hay’s first NFR experience and it is incredibly well deserved after his massive win at the Calgary Stampede, and breaking the world record at the Hardgrass Bronc Match with a 95.5 ride in Pollockville. Kolby Wanchuk sits in 10th spot with $115,761.40 won and Layton Green follows right behind him by $32 in the 11th spot with $115.724.72 won. Green has just come off a big 90-point win at the Magic Valley Stampede (Filer, ID) on Phenom Genetics Black Tie from the Sankey Pro Rodeo, where he won $3807. In the 13th spot with $95,311.14, coming off a win from the Walla Walla Frontier Days where he won $3976, is Dawson Hay. Dawson has cleaned it up in standings and is determined to make it to his third WNFR.  Lastly is the cowboy more determined to make his first WNFR than most, Kole Ashbacher sits right on the edge in the 15h spot with $91,102.94 won this season. Luckily, Ashbacher has just won some some money in Ellensburg and Armstrong, so he needs to make all these rides count in order to make that trip to Vegas happen. Ashbacher won $741 in the first round, $83 to tie for sixth in the finals, and $618 in the average and also took home the win and $2791.49 at the Armstrong IPE and Stampede.

In the team roping we also only see one Canadian cowboy who most likely remains safe in making it to the finals. Jeremey Buhler sits in the seventh spot of the world standings with $97,654.35 won. This puts Buhler ahead of Levi Lord, who sits in the eighth spot, by just under four thousand dollars.  His partner on the heading side, Rhen Richard, is in the sixth spot with $96,632.10 won.  Buhler has won the Ponoka Stampede, Rodeo Salinas, the Last Chance Stampede (Helena, MT), and Sisters Oregon Rodeo in the 2022 PRCA season. His efforts and talents for this season prove why he will be underway for his fourth WNFR.

Another contestant who seems safe in the standings and headed to Vegas is Shelby Boisjoli. The newly engaged cowgirl is as tough and handy as they come in the breakaway roping. Sitting sixth in the standings with $58,282.41 won.

Lastly, in the bull riding, are the two Canadians and traveling partners; Jared Parsonage and Jordan Hansen. Alongside Ashbacher, Parsonage is determined to make his first WNFR, sitting 13th in the world standings with $91,414.27 won this season. A second-place finish at the Armstrong IPE and Stampede, earning him $2536, has given him that boost in the standings.  On the bubble in the 21st spot is Jordan Hansen with $71,990.37. He may be six spots away from the top 15 but there is a tight race between all the bull riders. Cole Fischer sits in the 15th spot with $84,638 won, putting Hansen behind him by just under $13,000. Hansen needs to make some money moves if he wants to head to yet another WNFR. It is also to be noted that due to an injury, Sage Kimzey is out for the rest of the season, so these cowboys are competing for the 16th spot.

They call it the NFR Playoffs at the upcoming Puyallup Washington Tour Finale, where there is a total purse of $596,000. After that is the Pendleton Roundup as well as the Xtreme Bulls finals in Pendleton. We will also see some of the final Canadian rodeos that will count towards the PRCA standings, like Medicine Lodge, Hanna, Olds, Edmonton, and Coronation this coming weekend. The regular PRCA season will end on September 30th so any rodeos leading up to this date will help those qualify for the WNFR. The pressure on these contestants does not get much more intense than it will now.