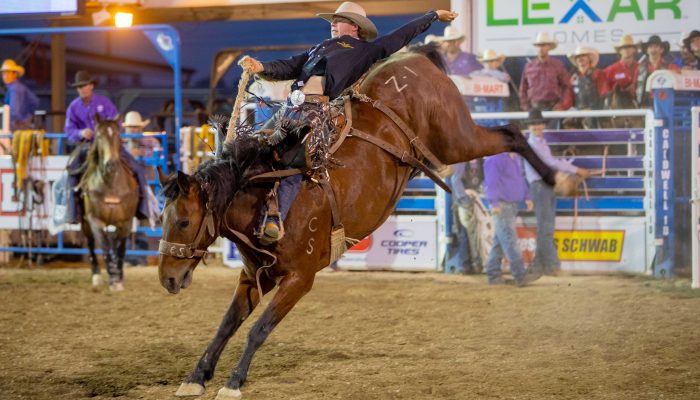 One Last Weekend to Secure a Spot at the WNFR

EDMONTON, AB (September 20, 2022) – The official rodeo season ends in the next ten days. With one rodeo remaining in Canada and a few large ones across the line, contestants are fighting hard for their last chance to make it to the Wrangler National Finals Rodeo in Las Vegas. The Edmonton Pro Rodeo is the last stop in Canada, with eight thousand dollars added in each event, those sitting on the bubble have a good chance to make it happen. The PRCA standings have changed drastically in each event and some cowboys have to hustle this coming weekend.

In the bronc riding we will get to see Zeke Thurston make his eighth WNFR and hopefully watch him win his third world championship. Thurston shows up in the number sixth spot and has won $141,048 this season with some of these earnings coming from Pendleton where he won $763 and $900 at the Washington State Fair Pro Rodeo. Making his well deserved first WNFR is Logan Hay, right behind Thurston in the seventh spot with $137,647. Logan Hay has won the prestigious Calgary Stampede, broke the world record at the Hard Grass Bronc Match in Pollockville with a 95.5 ride, and most recently won the Tri-State Rodeo (Fort Madison, IA) where he walked away with $4230. Coming off a huge win at the Washington State Fair Pro Rodeo is Layton Green who sits in the ninth spot. Green adds this $13,000 to his total earnings of $135,793 for the 2022 season. If all goes well, this will be Green’s third WNFR. Right behind Green in the 10th spot with $129,436.13 won is Kolby Wanchuk. On September 17th Wanchuk marked a fantastic 90 point ride to earn him the championship at the Pendleton Round-Up where he won a total of $3112 from a fourth place finish in his round and from the championship. Battling to secure their spot in Vegas are two incredibly talented Canadian Cowboys. Dawson Hay is in the 12th spot and Kole Ashbacher sits right behind him in the 13th spot. Dawson has won $111,717.59 and Ashbacher has won $111,077.28 putting only $640.31 in between the two of them. It will be thrilling to watch what happens this weekend while these guys secure that final spot.

Jeremy Buhler is the only Canadian that we will hopefully get to witness at his fourth WNFR in the team roping. Buhler has won $97,654 this season putting him in the eighth spot. Some of these earnings come from a second place finish at the Hanna Pro Rodeo where he and his partner, Rhen Richard, walked away with $1020 and another second place finish at Oldstoberfest where they won $1626.20. Richard sits in the seventh spot with $96,632.10 won. This will be Richards fifth WNFR.

In the breakaway roping Shelby Boisjoli still sits in fourth place with $63,792.77 won this season. Consistency has been on Boisjoli’s side this season and she has proven every earning she has gained.

In the bull riding there is a particular cowboy who has definitely made his way up in the world standings, proving that he deserves to make his very first WNFR. Jared Parsonage is now sitting in the eighth spot with $109,968.28 won. Most recently Parsonage won the New Mexico State Fair & Rodeo where he won $4702 with an 85 point ride on “Kill the Lights” from the Rafter H Rodeo Livestock. Parsonage has moved up four spots and won $18,554 since the last world standings update here on Everything Cowboy.

As stated above, eight thousand dollars is up for grabs at the last Canadian Pro Rodeo. There is also a total purse of $45,000 at the Amarillo Tri-State Fair and Rodeo, $36,000 at the Springhill PRCA Rodeo, $40,000 at the Poway Rodeo, and $73,750 at the Sheriff’s PRCA Rodeo. These are just a few of the PRCA rodeos that will end the 2022 season. With a large cheque to be won, these standings are bound to change. Each of these contestants may be safe as the WNFR takes 15 contestants, but we will hold our breath until the weekend is over. These cowboys wanting to make it to the WNFR will have to prove themselves more now than ever before. This is the most exhilarating time of the season because absolutely anything can happen. Stay tuned for an official update of who will be booking that flight to Las Vegas.