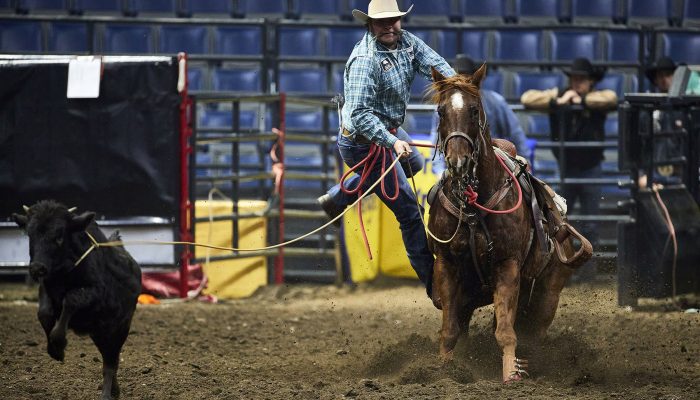 Among those competing through the event’s four performances–November 30 through December 3 at 7 pm each evening—are four recently-crowned Canadian Champions—bareback rider Ty Taypotat, barrel racer Taylor Manning and the team roping brother combination of Dawson and Dillon Graham.

Taypotat, a longtime former Regina resident came out on top of a down-to-the-last-horse battle at the recently concluded Canadian Finals Rodeo in Red Deer, Alberta while Manning put together a stellar effort over the CFR’s six performances en route to the teenager’s first Canadian title.

The Graham brothers who hail from Wainwright, Alberta, in addition to a spectacular 2022 season that saw them win twelve rodeos, are also the defending Maple Leaf Circuit champions.

Professional rodeo athletes competed at 35 plus events across western Canada with ten in each event making the cut for the Finals. The $12,000 in prize money up in each event will count toward the 2023 regular season standings. And the top two competitors in each event from the season standings receive berths to the NFR Open slated for next July at the Pikes Peak or Bust Rodeo in Colorado Springs, Colorado.

Highlights after the first two performances:

* Tie-down roper, Shane Smith (Wimborne, Alta.) was a back to back winner over the first two performances

* Bull rider, Coy Robbins (Camrose, Alta) who finished in the reserve position at the recently concluded Canadian Finals Rodeo in Red Deer, Alta., and is leading the Maple Leaf Circuit standings, earned a share of second spot in Regina on night #1, then split the round last night with fellow Albertan, Wyatt Gleeson, to remain well out in front in the bull riding standings

Watch for results, photos and highlights at the conclusion of the event later this week at rodeocanada.com The Maple Leaf Circuit Finals is being live streamed at FloRodeo.com