CALGARY, Alberta — This is it, the final week of the 2015 PRCA Season. This time next week we will know who has, or hasn’t made December’s Wrangler National Finals Rodeo in Las Vegas.

As of this morning according to ProRodeo.com, five Canadians rank inside the top 15 cut-off to make it to Vegas.

Unfortunately for Tyrel Larsen, when the money from Oldstoberfest in Olds, AB is accounted for, he’s going to be 16th to former World Champion Chad Ferley by $574. The Manitoba man picked up $2,427 in the first round in Pendleton, but was bucked off in the finals.

Fellow bronc rider Clay Elliott remains in the chase after finishing third in Pendleton. Elliott earned $4,021 thanks to a third place finish in Pendleton and placing sixth in Albuquerque. At this point he’s $5,735 back from 15th, an amount that is possible to earn this week.

Zeke Thurston is the top Canuck in the saddle bronc and earned another victory this weekend at the inaugural edition of Oldstoberfest. Thurston picked up $1,626 thanks to an 83.5 on C5 Rodeo’s Black Hills to still sit 12th of all bronc riders. 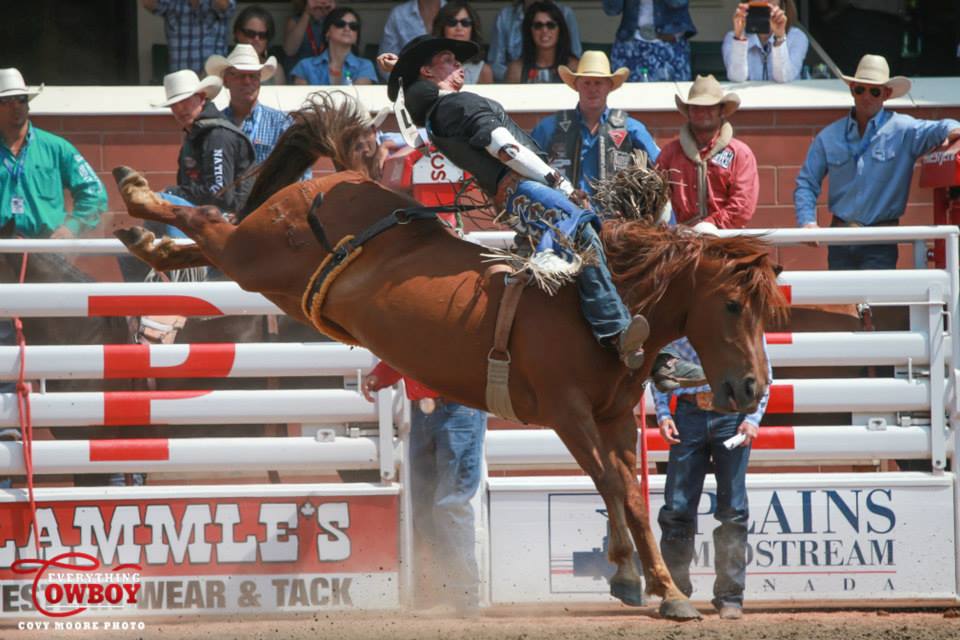 Orin Larsen rides Wayne Vold’s Dancing queen to an 88 point score and the win Day 8 of the Calgary Stampede on July 10th, 2015. Photo by Covy Moore.

Bull rider Jared Parsonage of Maple Creek, SK jumped to 38th in the PRCA’s World Standings after earning $5,013 between a third place finish in Pendleton and a win in Olds on C5 Rodeo’s Sugar Bear.

Also catching checks in Pendleton were Scott Guenthner, $1,225 from the first round in the bulldogging and Kyle Lucas who took $1,904 for a split of fourth in the first round of the tie down. Cole Neely caught fifth in Williston, ND for $261.