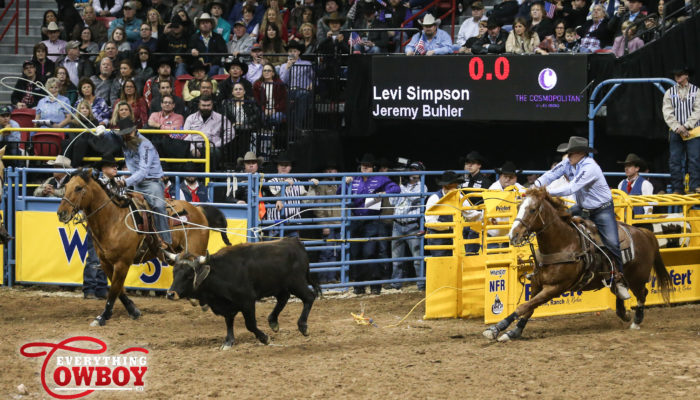 LAS VEGAS, Nevada — Canada holds down the top spot in the aggregate in both the Team Roping and Saddle Bronc after Round 7 of the Wrangler National Finals Rodeo.

Levi Simpson (Ponoka, AB) and Jeremy Buhler (Arrowwood, AB) put down a time of 4.3 seconds in Round 7 to split second for another $18,192 in earnings. With a no time from previous aggregate leaders Luke Brown and Jake Long, Buhler and Simpson out front by an entire run with 45.3 seconds on seven. No one else has recorded a time each night.

After not moving up the standings the past couple nights, the team ranks sixth on the head side and fourth on the heels respectively. Simpson is just over $60,000 behind the number one man while Buhler is back by $45,000. The team in first? Luke Brown and Jake Long who still rank second in that aggregate despite the no time.

Fellow Canadian team roper Kolton Schmidt of Barrhead, AB has had a rough week. He and partner Shay Carroll have only recorded one time in seven days, with another no time tonight. Schmidt is the lone Canadian yet to earn a check.

Hudson Hope, BC’s talented Jake Watson has quietly made his way to seventh in the world standings and top of the Wrangler NFR bronc riding aggregate standings. A score of 83.5 points on Northcott/Macza’s Get Smart got Watson a check worth $15,795. That brings his total earnings up to $75,083 with 581 points on seven horses. 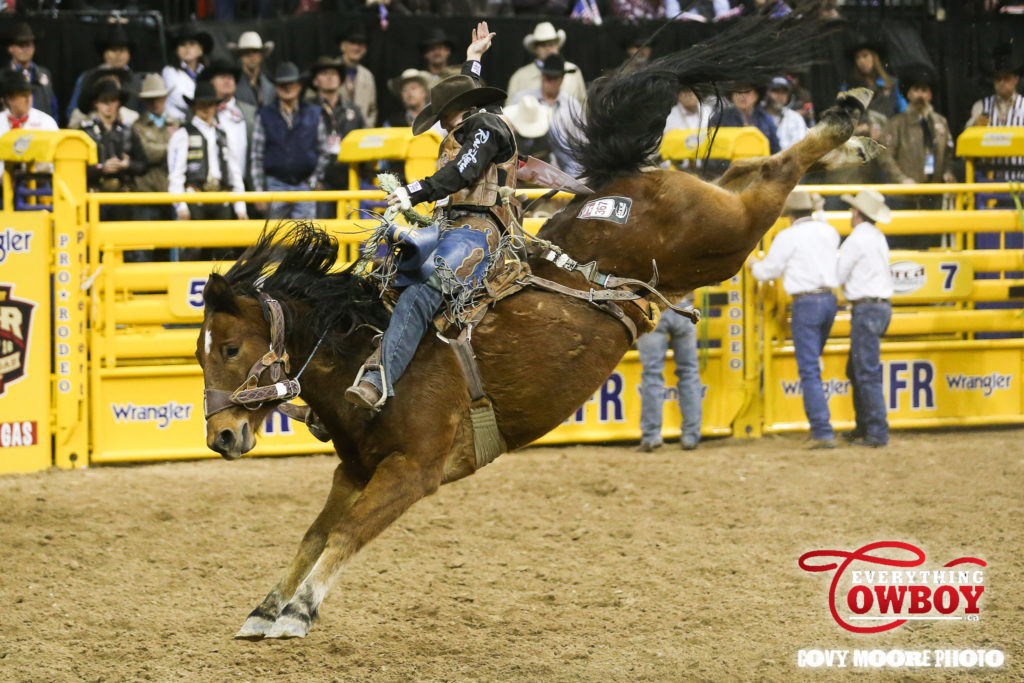 Jake Watson and Get Smart team up for 83.5 points in Round 7 of the Wrangler NFR on Dec 7th, 2016. Covy Moore/CovyMoore.com

Right behind the BC man in the aggregate standings is fellow Canadian Zeke Thurston of Big Valley, AB. Thurston is a full horse back, with 499 points on six. On Wednesday night, Zeke put up 80 points on a horse called Angel Slings for sixth place and $4,231. He’s up to $64,154 on the week to rank fourth in the world. Clay Elliott was also on the board in Round 7 to mean that all three Canadian bronc riders placed in two consecutive nights. Elliott was 81 points for the fifth place check worth $6,769. He has $32,212 on the week to rank 11th in the world and eighth in the aggregate.

Manitoba’s Orin Larsen made his way through the pain to the paywindow once again in Round 7 for the second straight night. The check tonight was worth $2,115 bringing his total to $30,308 on the week. Larsen ranks 13th in the aggregate and fifth in the world to date. Jake Vold’s gold buckle dreams took a hit on Wednesday after a low 76 point effort. The Ponoka, AB athlete sits second in the aggregate, 16 points behind world number one and aggregate leader Tim O’Connell. Vold is also back by $108,000 despite already banking $101,243.58 in the first six days.

Earnings on Canadian bucking stock through Round 7: $283,957