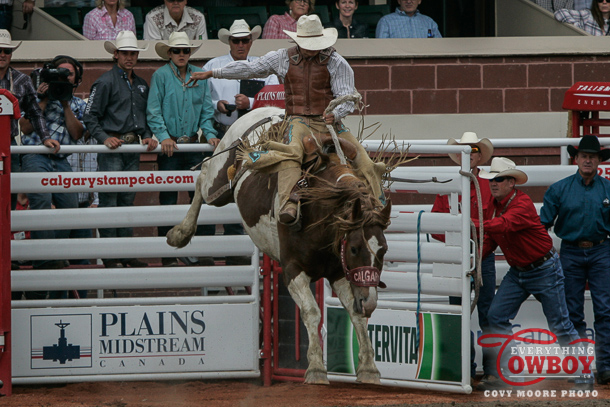 Jake Watson on a charge at San Antonio

With a unique format at San Antonio, none of the contingent of Canadians have found a consistency like that of saddle bronc rider Jake Watson.

Sitting on $10,929 through five performances which gives him a berth at tomorrow’s finals, Watson says he is elated with the success he has seen so far at the San Antonio Rodeo.

“It’s still kind of still setting in. I have never won anything near that kindof money before,” he told Everything Cowboy. “This year is definitely the best. This is my second year on my full card and I am getting into a lot of different shows now, this is the first time I have been to San Antonio. This is pretty cool.”

While the young cowboy is no rookie to the sport, having started riding broncs at the age of 16, Watson says that he feels good after the five performances so far and is looking to approach each ride the same as he has the previous five horses during this year’s event in San Antonio.

“I try and approach every horse the same, stay calm. I like to stand on the bucking chutes and stretch before, look at the arena whenever I can,” he said. “Keep calm, try not to think about bronc riding as much as I can basically, try to not nerve myself up.”

While Watson is by far the money leader from the Canadian’s still in the running, he says there is an air of excitement whenever you get to see a countryman during the winter months.

There were dozens of Canadians taking part in the race to the finals, with Levi Simpson/Jeremy Buhler in the team roping, Tyrel Larsen and Jake Watson in the saddle bronc and Ty Pozzobon guaranteed a spot tomorrow. With one semi-final performance left to decide their fate, Orin Larsen, Ty Taypotat and Kolton Schmidt have a great shot at making tomorrow’s finals with a solid showing tonight.

Other Canadians who took part but didn’t quite make the cut to the final performance at San Antonio were Luke Creasy, Morgan Grant, Clay Elliot, Deb Guelly Jake Vold, Matt Lait, Clayton Moore, Kyle Lucas and Tanner Milan among others.