As of the current standings this evening, the Cadogan, AB man, sponsored by Bozco Enterprises, has over $71,ooo on the year. 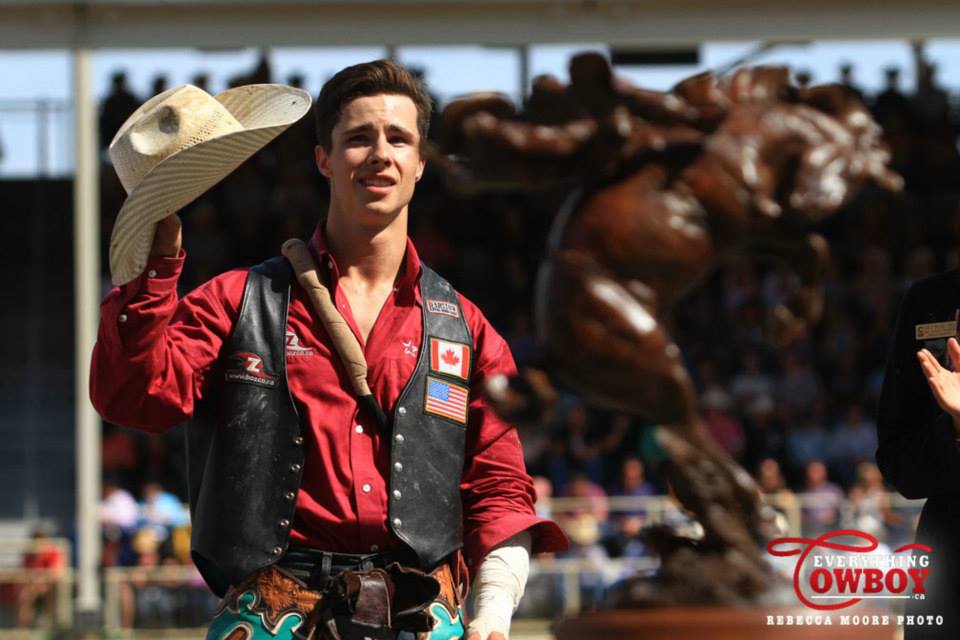 Clint Laye salutes the crowd after his $100,000 win at the 2015 Calgary Stampede. Photo by Rebecca Moore.

Tanner Milan holds steady in the top half of the steer wrestling World Standings. Fellow bulldogger Clayton Moore picked up $4,275, most of which came from splitting second in San Juan Capistrano, CA. 20th currently, the 2013 Canadian Champion, should move up a couple spots and within $7,000 of that 15th spot.

In the saddle bronc, Tyrel Larsen earned $2,913 between a win in Moses Lake, WA and a seventh-place finish in San Juan. Larsen sits 14th having earned over $48,000 on the season. Just over $1,300 separates him from fellow Canadian Clay Elliott who’s now 17th. Elliott picked up $1,711 from Caldwell and another $181 from Canby for a $1,892 week. Zeke Thurston remains 10th after earning another $842 between Canby and Lethbridge.

Team ropers Levi Simpson and Jeremy Buhler hold steady in 19th and 20th respectively. The team placed in Caldwell in the first round adding $839 a man to their WNFR accounts.

Deb Guelly finished fourth overall in Caldwell to earn $3,092. Currently, she’s 28th but that doesn’t include these earnings. At this point Guelly is within $13,000 of 15th.