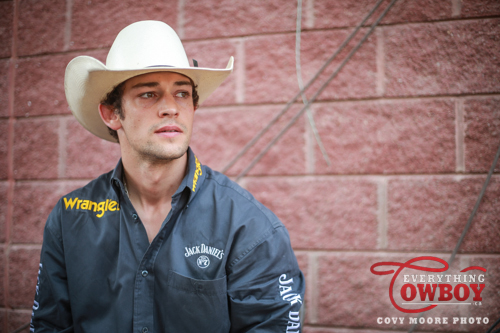 Ty Pozzobon hasn’t exactly been the luckiest bullrider around in the past year or so.

Pozzobon fell out with major injuries three times since his scary wreck at the 2014 PBR Canada Finals in November of that year, followed by a broken leg at Ellensburg Washington in September of 2015

That break took the better part of five months for the Merritt, B.C. native to come back from.

San Antonio a couple of weeks ago was a great start back for Pozzobon, winning his bracket, but coming just a little bit short in the short-go to move on to the finals. 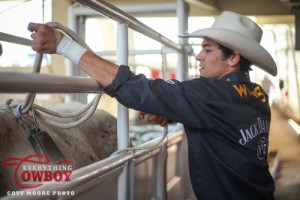 “Even though I did well, I felt like I was still pretty rusty, and that showed in the short round,” he told Everything Cowboy.

Now he is poised for a chance to move on to the finals in Houston, covering all three of his bracket bulls enrolee to a spot in the semi-finals, scheduled for later this week.

“I am just feeling like my normal self again, picking up my timing and stuff,” said Pozzobon. “I am looking forward to big things this week.”

Pozzobon has fond memories of the Houston arena, as it was this event in 2012 that he was on a similar run through his bracket, winning two of the three nights, but fate would send him to an even bigger arena before he had a chance to ride in the short-go.

“I went to ride in the short round and that was when I got onto the (PBR) Built Ford Tough Series, and I had to draw out of Houston when I was kicking ass there,” he said. “That was disappointing, I am excited to be here for the full rodeo.”

Even with success so far since his return to regular competition, Pozzobon says it has taken all the time off to get him back in the mindset a bullrider needs.

“When I broke my leg in September, I was on the highest of highs. I had rode something like 10 bulls in a row, was 92.5 in Okotoks.”

“It has taken all that time to gain confidence back.I have been put through the test, and I feel like now that I made it through all this there are good things to come.

The highly politicized Elite Rodeo Athletes (ERA) organization, creating a short rodeo series with massive payouts for the sports top stars has invited Pozzobon onto the tour, scheduled to start next month.

Most recently, courts backed the Professional Rodeo Cowboys Association (PRCA) in blocking any of the shareholders in the new ERA from competing in any PRCA rodeos, and making them ineligible for a shot at the Wrangler National Finals Rodeo.

“Bullriding is a tough enough sport to make a living at, and they (PRCA) are going to limit us for that,” said Pozzobon.

“People are not getting with the times. I think this will end up hurting the PRCA. This is just what the PBR did 20 years ago in bullriding.”

Additionally to being in that inaugural class of competitors of the ERA, they are offering shares in the organization.

“I have to make up my mind here in the next while if I want to be a shareholder or not. You can do both, ERA and PRCA, but you can’t if you are a shareholder,” Pozzobon said.

“How do you think those guys that didnt buy into PBR feel now?”