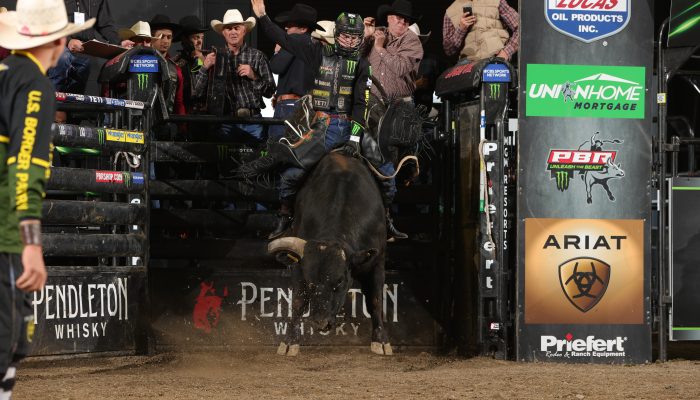 “I am so hopeful about our team and the riders we have already assembled for the Oklahoma Freedom,” said Oklahoma Freedom Head Coach Cord McCoy. “The men we have are ready to compete, and I am excited that we can add a couple more gold buckles to our roster this week.”

“With a team put together like this, I feel if we all do what we’re capable of, and have shown, we’re as unstoppable as the 1992 Dream Team,” Lockwood said.

The supplemental draft held today was comprised of riders declaring availability for fewer than 10 regular-season events (but no less than five regular-season events), helping teams fill seven protected roster positions. Today’s draft follows an initial five-round draft teams had participated in on May 23 to begin filling their core rosters.

Lockwood joins the Oklahoma Freedom, who host their inaugural homestand on Sept. 16-18 at Paycom Center in Oklahoma City, looking to further etch his name in the PBR record books.

The new PBR Team Series features the world’s top bull riders competing on eight teams in five-on-five bull riding games during an 11-event season beginning in July and culminating in a team championship at T-Mobile Arena in Las Vegas November 4-6.

The young Montana native made his PBR premier series debut in 2016, winning his home state event in Billings, en route to being anointed the 2016 PBR Rookie of the Year.

In 2017, Lockwood put all of PBR on notice. Winning the season-launch Major in New York City,

the surging bull rider, then 19, was world No. 1 for the first time. He then held that ranking for six

After a groin injury limited Lockwood in 2018, he roared back to his winning ways in 2019.

Then 21, Lockwood again won the season-launch Major in New York City, as well as the tour stop the following weekend in Chicago, to take a firm hold of the world No. 1 ranking, which he held for the first nine weeks of the season until late March after sustaining a broken collarbone during the 2019 PBR Global Cup USA in

February, which sidelined him for three months. Upon returning in mid-May in Albuquerque, Lockwood, who had slipped to world No. 4, began to mount one of the most dominant summer campaigns in PBR history, winning five Touring Pro Division events in both the United States and Canada to enter the first event of the second half in Tulsa No. 3 in the world. Lockwood then swept both the main event and the 15/15 Bucking Battle and left Oklahoma back atop the world rankings. He solidified that spot by winning the following weekend in Houston.

Despite winning two additional 15/15 Bucking Battles in the remainder of the regular season,

Lockwood was surpassed by top challenger Jose Vitor Leme to enter the World Finals No. 2 in the

In the three years that have followed, while Lockwood has showed glimmers of his past championship form, including a world No. 5 finish in 2020, he has been plagued with injury, including to his hamstring, shoulder and pelvis. Spending much of 2022 sidelined to recover, Lockwood is in full health as he readies to compete for the Oklahoma Freedom.

The Oklahoma Freedom is operated by Prodigal, a full-service sports and entertainment agency based in Oklahoma City, Oklahoma, with the front office staff including General Manager Brandon Bates and Assistant General Manager Chris Dashney.

During McCoy’s career, he finished inside the world’s Top 50 six times, registering 10 event wins and 10 90-point rides across all levels of competition. Following his retirement, in addition to making three appearances on The Amazing Race, McCoy grew his stock contracting business into one of bull riding’s most elite outfits. In 2022, Ridin Solo became McCoy’s first-ever World Champion Bucking Bull, joined inside the world’s Top 10 by fellow pen mateCliffhanger.

Ten-time PBR World Finals Qualifier Lostroh reached the pinnacle of the sport in 2009 when he was crowned World Champion following a feverish battle with J.B. Mauney. After stepping away from the PBR following the 2014 season, Lostroh was diagnosed with a tumor around his carotid artery in 2015. While Lostroh made a full recovery, and briefly returned to competition, he officially retired March 2018, and has since resided in Colorado with his wife and children.

Tickets for the three-day event are on-sale now, and start at $20, taxes and fees not included. Tickets can be purchased online atTicketmaster.com and PBR.com, at the Paycom Center Box Office, or by calling PBR customer service at 1-800-732-1727.

About the Oklahoma Freedom:

The Oklahoma Freedom are based at Paycom Center in Oklahoma City, joining team tenants including the NBA’s Oklahoma City Thunder, and their G League affiliate Oklahoma City Blue, where the team will hold its inaugural Oklahoma Freedom Fest homestand September 16-18, 2022, the 8th regular season event of the 10-event PBR Team Series 2022 regular season. The Freedom are coached by Oklahoma native Cord McCoy, a former bull rider and four-time qualifier for PBR World Finals. Under the leadership of General Manager Brandon Bates, the team is operated by Prodigal, a full-service sports and entertainment agency based in Oklahoma City, Oklahoma. The senior staff at Prodigal has more than 100 years of experience managing sport and entertainment events and teams. PBR and Prodigal have a longstanding relationship dating to 2007, partnering annually on Unleash The Beast events in the Sooner State.