MERRITT, British Columbia — Aaron Roy was victorious at the Third Annual Ty Pozzobon Invitational PBR tonight at the Merritt Rodeo Grounds. The win this evening was his first on Canadian soil in 2015.

Roy has already earned over $43,000 in PBR competition since his return last November in Saskatoon, $4,896 of which came on Saturday. Currently 31st in the World Standings, Roy has the potential to move up a couple spots with the 60 points earned here. He also makes a big jump in the Canadian Standings of the PBR.

Starting off the summer break on the right foot, the three-time Canadian PBR Champ rode 2 Dark 2 C from the Wild Hoggs to kick off five consecutive rides in the long go. A score of 86 there held up to take him to the finals where he put up the 86.5 on True Blood from the Vold/Prescott crew to edge Tanner Byrne by a single point.

Byrne earned 30 points towards the PBR’s World Championship via his 171.5 points on two bulls. An 82 in the long go, added to his 89.5 in the finals on Vold/Prescott’s Smoke Show, earned him over $4,000. This adds to his ranking of the top Canadian in those World Standings, currently 19th. It also adds to his ranking here in Canada as he came in sitting sixth.

Garrett Green was fourth in those PBR Canada Standings coming into Merritt. Leaving, he’s hot on the heels of current number one, Scott Schiffner, who came up just short on Pipeline and got run clean over. Green picked up over a quarter of $10,000 for his 88 point effort on Captain Obvious that won the long go and 20 points towards his world standings count.

2006 Pro Rodeo Canada Champion Tanner Girletz made a great ride on Wanderlust to score 87, earn 15 points and a check worth just shy of $1,800. Tyler Pankewitz and Adam Jamison picked up 10 points and five respectively for scores of 86.5 and 85 respectively.

A huge thank you goes out to the organizing committee of the third annual Ty Pozzobon Invitational PBR. Without you all this event wouldn’t happen. Thank you to Courtney Christy for providing all this evening’s live updates on Twitter along with John and Simone Chenoweth for the following video highlights!

Personally I’ve got to say that I feel like part of the family when I’m in Merritt. There aren’t many places I go all year besides my house in Calgary or Mom and Dad’s that are like that. Thanks again to the Pozzobon Family and the entire crew for making this event as special as it is. We are all looking forward to the fourth edition in 2016! 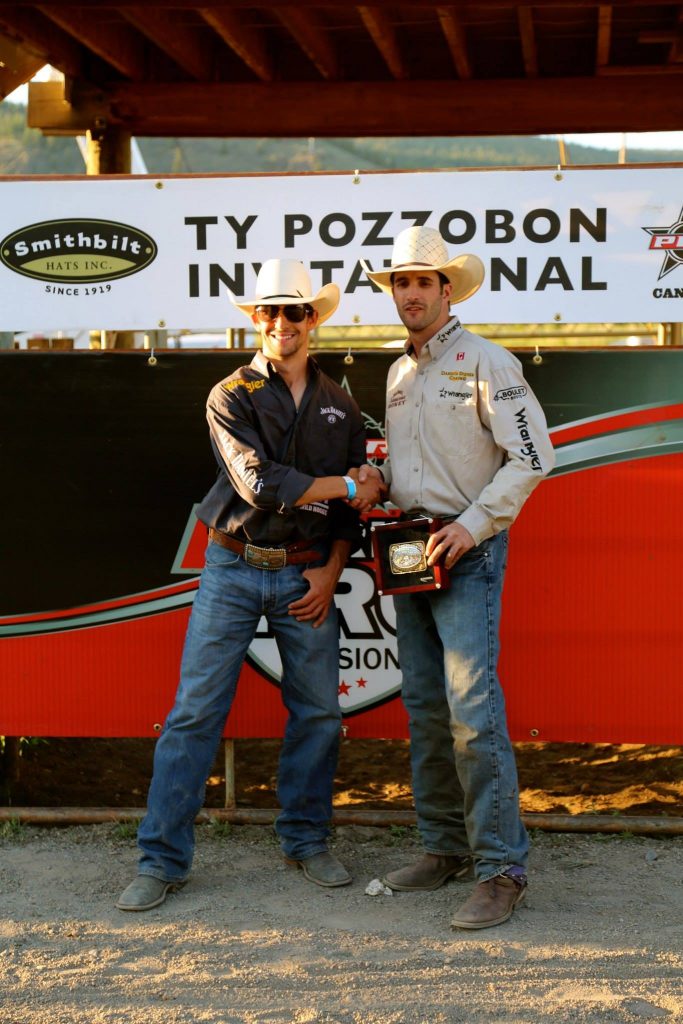 Ty Pozzobon presents Aaron Roy with the Montana Silversmiths buckle for winning the third annual Ty Pozzobon Invitational PBR in Merritt, BC on May 30th, 2015. Photo by Gail Joe.

Next up on the PBR Canada’s 2015 Schedule is the Wanham, AB PBR Bull Riding Extravaganza on June 12th.