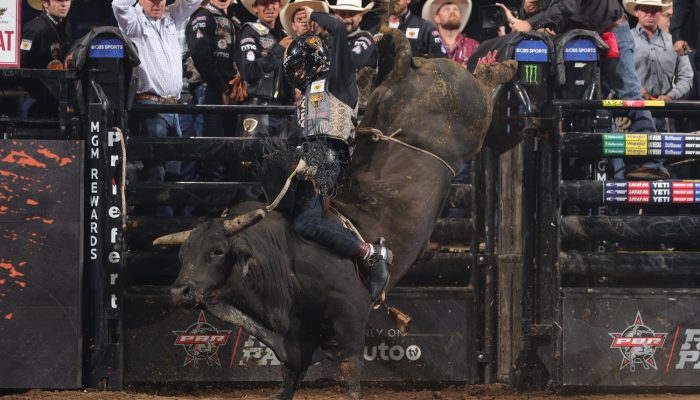 NASHVILLE, Tenn. –  When the PBR (Professional Bull Riders) Stampede Days kicked off Friday nightinside Bridgestone Arena, the race to be crowned the inaugural PBR Team Series Champions intensified as the league’s top team was upset, a rising contingent won their fourth straight game and a streaky team of top talents recorded a string of qualified rides putting the entire league on notice.

In the opening game in Music City, the Ariat Texas Rattlers earned a crucial victory, upsetting the No. 1 Missouri Thunder 174.25-0.

The final game of the evening featured the hometown debut of the Nashville Stampede, the city’s newest professional sports team. Despite a quick start to the game, as both Kaique Pacheco and Thiago Salgado converted in the contingent’s opening two outs, the Stampede inevitably fell to the Carolina Cowboys 324-176.25.

In the game, the Cowboys went a near perfect 4-for-5, covering 80% of their bulls.

PBR Stampede Days continues Saturday, August 20 at 6:45 p.m. CT. Tickets are still available and can be purchased online at Ticketmaster.com andPBR.com, at the Bridgestone Arena Box Office, or by calling PBR customer service at 1-800-732-1727.

In addition to musical acts on Aug. 20, fan fest patrons will be able to take part in three line-dancing lessons (2:00 p.m., 3:15 p.m. and 4:15 p.m.) under the instruction of Darcy Leasure, a featured professional from the Wildhorse Saloon.

PBR RidePass on Pluto TV will offer replays of all the PBR Team Series action from Nashville, Tennessee. Check https://pluto.tv/en/live-tv/pbr-ridepass for the latest programming schedule.

NASHVILLE, Tenn. – Backed by two strong scores from Cody Jesus (Window Rock, Arizona) and Braidy Randolph (Jonestown, Pennsylvania), the Ariat Texas Rattlers upset the No. 1 Missouri Thunder 174.25 – 0 Friday evening in the first game of the PBR (Professional Bull Riders) Team Series event in Nashville, Tennessee. After a scoreless opening frame, Jesse Petri (Dublin, Texas) took to the chutes for the Thunder and Jesus was ready to ride for the Rattlers. After Petri was bucked off by Budakon (Hale Cattle Co.) in 5.05 seconds, Jesus reached the requisite 8 on Step That Step (Lucas Manning Bucking Bulls) for 87.25 points. Andrew Alvidrez (Seminole, Texas) then hoped to be the game-changer for the Thunder. After a difficult time in the chutes withHawkeye (Jane Clark/Gene Owen), Alvidrez was disqualified as he apparently failed to nod his head before the chute clock hit 0. The call entered review, and the game continued on, with the third frame ending in a Rattlers buckoff for Rafael Jose de Brito (Potirendaba, Brazil). As the crucial fourth rotation of riders got underway, the Thunder’sAdriano Salgado (Batatais, Brazil) failed to reach the 8 aboard ZZ Top (Lucas Manning Bucking Bulls), giving the Rattlers the chance to clinch the game win during young gun Randolph’s out withUncle Gangster (Pick-it Hammers). Rising to the occasion, Randolph secured the upset victory for the Cody Lambert-coached contingent as he delivered a qualified ride for 87 points. During the fifth frame, the verdict from Alvidrez’s challenged disqualification was determined and his team was awarded a re-ride. After the Thunder’s apparent final rider Colten Fritzlan (Rifle, Colorado) bucked off, the Missouri outfit’s re-ride was delegated to Australian sensation Callum Miller (Warwick, Queensland, Australia). Despite the call, however, the scoreboard remained unchanged, as Miller and Rattlers’ Brady Fielder (Clermont, Queensland, Australia) failed to convert. The Ariat Texas Rattlers earned their third team win, 174.25-0, over the Thunder. As PBR Stampede Days continue Saturday evening, the Ariat Texas Rattlers (3-5) will look to continue their momentum when they play the host Nashville Stampede (2-6), while the Missouri Thunder (6-2) will attempt to rebound against the Oklahoma Freedom (3-5).

NASHVILLE, Tenn. – Compliments of back-to-back qualified rides in the opening two frames of the game, the Kansas City Outlaws defeated the Oklahoma Freedom by one ride score, 174.75-87.25, during the first night of competition for the PBR (Professional Bull Riders) Team Series event in Nashville, Tennessee. As the game got underway, the Freedom’s Matt Triplett (Canton, South Dakota) was the first to leave the chutes inside Bridgestone Arena. Conquering Dr. X (Universal Pro Rodeo/Pepper/Freeman Cattle Co.) for 87.25 points, Triplett gave the Freedom an early lead. The Outlaws, however, were quick to respond. Returning to competition for the first time since sustaining sidelining injuries in late July,Dalton Kasel (Muleshoe, Texas) rapidly proved why he was the J.W. Hart-coached contingent’s first-round draft pick. Covering Spice (Flying C/Flying P Bucking Bulls) for 89.25 points, Kasel put his team 2 points ahead. In the second frame, afterBriggs Madsen (Tremonton, Utah) failed to continue the Freedom’s success, bucked off byDraco (Blake Sharp/Koe Wetzel/Hurt/Wilson/Lee) in a quick 2.79 seconds, Marcus Mast (Middlebury, Indiana) kept the Outlaws’ red-hot momentum alive. The clutch rider for the Outlaws coveredPrisoner (K-C Bucking Bulls) for 85.5 points to give his team an 87.5-point lead. As the scoreboard remained unchanged through the third and fourth cycle of riders, the game came down toCasey Roberts (Munford, Alabama), in a must-ride position for the Freedom at the top of the fifth. Matched up with Ivy League (Jane Clark/Gene Owen) by Head Coach Cord McCoy, Roberts was unable to keep his team’s hopes alive, brought down in a quick 2.91 seconds. After Koltin Hevalow (Smithville, Missouri) was bested in the final out of the game, the Kansas City Outlaws emerged supreme, winning 174.75-87.25. During the second slate of games for PBR Stampede Days on Saturday, August 20, the Outlaws (3-5) will take on the Arizona Ridge Riders (4-4), while the Freedom (3-5) will look to reverse their fortunes when they face off against the Missouri Thunder (6-2) who were also defeated Friday evening.

NASHVILLE, Tenn. – The Austin Gamblers kept their win streak alive Friday evening in Nashville, Tennessee, outlasting the Arizona Ridge Riders 175.25-85.25 to earn their fourth consecutive game win in the PBR (Professional Bull Riders) Team Series. After a scoreless two rounds to begin the game, with the Gamblers awarded a re-ride in the first frame, the game intensified as Lucas Divino (Nova Crixas, Brazil) was up for Austin, and Sandro Batista (Pedra Preta, Brazil) readied to represent the Ridge Riders. Divino put the first points on the board, riding Twisted Feather (Blake Sharp/Micheal Floyd/Cain Kobert) for 87.75 points. While Batista was fast to answer, covering Tiger (Blake Sharp/Henry Wilson) for 85.25 points, it was not enough to take the lead, and the Gamblers entered the fourth frame 2.5 points ahead. As the game entered the final stretch, Austin Richardson (Dallas, Texas) and Keyshawn Whitehorse (McCracken Spring, Utah) were unable to convert for their teams, making the fifth frame game-deciding. No stranger to must-ride situations, two-time PBR World Champion Jose Vitor Leme (Ribas do Rio Pardo, Brazil) was in the closer position for the Gamblers. Rising to the occasion, Leme matched JoJo (Gene Owen Bucking Bulls) jump-for-jump, reaching the whistle and awarded a critical 87.5 points as the electric crowd burst into cheer. As the final rider out, Ridge Riders’ Luciano De Castro (Guzolandia, Brazil) needed a score in excess of 90 points to earn the win. While Castro appeared to have covered Big Bank (Universal Pro Rodeo), the Gamblers challenged the call, sending the out into review. After replay, Castro was determined to have slapped the bull at 0.6 seconds, earning him no points, and cementing the 175.25-85.25 win for the Austin Gamblers. On the second night of action for PBR Stampede Days, the Gamblers (5-3) will look for their fifth straight win when they play the Carolina Cowboys (4-4), while the Arizona Ridge Riders (4-4) will attempt to snap their backwards slide when they take on the Kansas City Outlaws (3-5).

NASHVILLE, Tenn. – In Friday night’s final game of PBR (Professional Bull Riders) Stampede Days, the streaky Carolina Cowboys poured on the rides to defeat the hometown favorite Nashville Stampede. Unable to keep pace with the Cowboys, who went a torrid 4-for-5, Music City’s newest professional sports team fell to Carolina 176.25-324. As the game got underway, the teams were locked in a slugfest, each delivering scores in the first two frames of the game. In the first round, Boudreaux Campbell (Crockett, Texas) struck first, giving the Cowboys an 83.5-point lead after he rode Light’s Out (Jane Clark/Gene Owen). Stampede Captain and 2018 PBR World ChampionKaique Pacheco (Itatiba, Brazil), however, was fast to put his team atop the scoreboard, coveringMidnight Flyer (Jane Clark/Gene Owen) for 88.75 points and giving the Stampede a 5.25-point lead as the second round got underway. Ramon de Lima (Rio Branco, Brazil) was next to ride for the Cowboys, logging his contingent’s second score when he went the distance atop Bobkat (Bob Whisnant/Shaw Cattle Co./Hilton Bull Co.) for 86.5 points. In the bottom of the second, the Stampede again outscored their Tar Heel State rivals, asThiago Salgado (Navirai, Brazil) rode Theodore (Lari Crane/Gene Owen) for 87.5 points. As a result, the Stampede approached the mid-point of the game with a 6.25-point lead. The scoreboard went unchanged in the third frame as both teams registered their first buckoffs, but a momentum shift loomed. As the first team out in the fourth, the Cowboys made a business decision, opting to keepMason Taylor’s (Maypearl, Texas) 64.25-point ride on Experiment 626 (Classic Jack Cattle/Viducic Bucking Bulls) instead of accepting a re-ride. With Manoelito de Souza Junior (Itamira, Brazil) unsuccessful aboard Red Scorpion (Mike Miller Bucking Bulls), the Cowboys began the fifth frame with a 58-point lead. As the first team out, reigning PBR World Champion Daylon Swearingen (Piffard, New York) had the chance to clinch the come-from-behind win for the Cowboys as he climbed aboard Mr. Nasty (Blake Sharp/Koe Wetzel/Cody O’Neil). Delivering under pressure, Swearingen reached the requisite 8 for a crucial 89.75 points, capturing the win for the Richard Childress Racing-operated outfit. While the Stampede still had one rider left, three-time PBR World Champion Silvano Alves (Pilar do Sul, Brazil) bucked off in his Team Series debut, with the final scoreboard showcasing a 324-176.25 Carolina victory. When PBR Stampede Days continues, the Nashville Stampede (2-6) will seek their first win in their hometown when they play the Ariat Texas Rattlers (3-5), while the Carolina Cowboys (4-4) will look for their second victory in the Volunteer State when they take on the Austin Gamblers (5-3).

Here are the current Team standings for the Nashville PBR Team Series event after the opening day of competition for PBR Stampede Days:

Here are the current Team standings for the regular season after the opening day of competition for PBR Stampede Days in Nashville:

Here are the game matchups for the second day of action for PBR Stampede Days on Saturday, August 20:

The PBR Team Series is an elite new league that will feature the world’s top bull riders competing on teams in five-on-five bull riding games during an 11-event season beginning in July and culminating in a team championship at T-Mobile Arena in Las Vegas November 4-6.  During the 2022 season, each of the eight teams representing teams in Austin, TX; Fort Worth, TX; Glendale, AZ; Kansas City, MO; Nashville, TN; Oklahoma City, OK; Ridgedale, MO; and Winston-Salem, NC will host a three-day homestand.  There will also be neutral site games in Cheyenne, WY and Anaheim, CA. To determine team rosters, the league held a rider draft on May 23 prior to start of the 2022 season among any bull riders who have declared for the draft during a league eligibility window. The PBR Team Series builds on the existing structure of professional bull riding with the same basic rules for judging and scoring qualified 8-second bull rides. Events will be staged in a tournament-style format with all teams competing in head-to-head matchups against a different opponent each day. Each game will feature five riders per team squaring off against another team. Full team rosters will be comprised of seven riders on the core roster and three practice squad members. The team with the highest aggregate score of qualified rides among its riders will be declared the winner of each game. The event winner will be the team with the most game wins across an event, with a special bonus round designed as a tie-breaker to determine final event standings. All PBR Team Series events will be carried on either the CBS Television Network, streaming live on Paramount+, CBS Sports Network, or RidePass on PlutoTV.